These 9/16″ turret counters provide a wealth of information about the vehicle, including not just BU/CE status or MA and CMG information, but also a variety of esoteric rules/vehicle notes reminders, as well as variants.  Counters can remind you that smoke mortars can only fire within their TCA, that AAMG cannot be fired while BU, that a vehicle’s turret may not be able to traverse or fire through the “starboard” side of the vehicle, and so forth.  In a nice touch, there are also counters for gyrostablized tanks, a feature represented by a double-circled or double-squared turret symbol, as opposed to the single circle or square on regular tanks.

The counters of Steel Master Module B are improved over the versions that appeared in the first module.  First, the die-cutting now has corner nibs rather than center nibs, a feature much preferred by wargamers.  Second, the counters now have a gloss finish rather than a matte finish, which makes them look in both color and appearance much more compatible with their official vehicular counterparts.  The counters are also supposedly very slightly thicker.  All of these are welcome improvements.

The counters are now very nice, and armor aficionados and those who might want to impress their friends by whipping out some cool custom counters can definitely do so by bringing these puppies out.  It is a shame, though, that the AFV designations, armor values, and MG values are still in such a tiny type, as there is room on the counters for them to be made larger and more readable.  However, overall it is a good achievement. 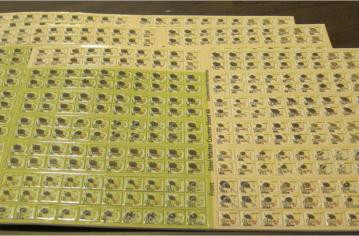