NOTE:  See the Devils in the Woods entry for ALL POST-2011 Darkest December information.

Sudden Full Contact (SFC) is one of two Battle of the Bulge related historical modules released by Critical Hit at the same time (the other being Devils in the Woods).  Designed by Pedro Ramis and developed by David Lamb, it features a smallish historical map of the town of Hotton on the Ourthe river and the surrounding terrain.  The map is attractive, in the latter-day earth-tone Critical Hit style, and features interesting terrain.

The map is a nice map, but the scenario selection in this module leaves much to be desired.

2nd Edition (Darkest December) Notes:  In 2011, Critical Hit began a series of module reprints, often hastily done, typically to take advantage of the new style of 5/8″ counter artwork they had recently developed.  After a bundle of reprints consisting of, more or less, their 1940-related products, Critical Hit released another reprint bundle that was more or less centered around Battle of the Bulge-related products.  That is presumably the only reason why the long-forgotten Sudden Full Contact and Devils in the Woods, two small Bulge historical modules released at the same time in 2004, were combined and given a facelift and a reprint seven years later.

The modules were originally released without any counters–they don’t need any special counters–and the counters provided in Darkest December are also not needed, merely being duplicates of existing counters.  It is not clear why anyone would prefer using these over the official counters, though the new style layout and artwork is certainly better than Critical Hit’s previous style of counter layout and artwork.

The maps of Sudden Full Contact and Devils in the Woods were also redone, with generally a poorer result than the originals.  The main problem is a much darker palette which makes areas of the map–think dark green on very dark brown–hard to make out.  The smallest map, the Melines map, is probably the most usable.  The largest map, depicting the village of Hotton, is worse but players can make do.  The Quatre Bras map, however, is an essentially unplayable mass of dark and darker brown, often overlayed with dark green.  It is far worse than the original.  The thinking behind this new map palette is impossible to discern.

Most of the scenarios have some sort of mist effect, with 6 scenarios having special “heavy mist” rules.  Four scenarios use OBA.  An amazing 8 scenarios, more than a third of the total, are Night scenarios, so prospective purchasers had better be happy with Night rules.

This is a not particularly well done reprint of two modules that were not all that great in the first place.  For owners of those two modules, there is definitely no need to purchase the new module–owners would probably prefer the maps from the originals.  For other people, this product is best suited for that subgroup of ASL players who like both small scenarios and Night scenarios.

One additional thing to note is the high price.  Originally listed at $69.95, and later reduced to $49.95, this module is overpriced even then. 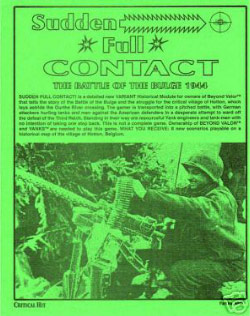