Most English-language ASLers today know of “Tactiques” purely as a large set of freely downloadable scenarios available from several places on the Web.  Those downloads, however, came from somewhere, and the place from where they came is far more interesting:  the French-language ASL magazine Tactiques, published twice a year from 1991-1995.  Tactiques was remarkable for being the first third party ASL magazine, pre-dating American equivalents such as Critical Hit Magazine, Backblast, Time on Target and others by a number of years.  For most of its run, it was the only ASL magazine other than the ASL Annual.

Moreover, Tactiques was no mere newsletter, but a true magazine of impressive physical quality and substance for its time.  Upon its debut, and for several years afterwards, there were no other third party products of equivalent quality (although it was expensive).  Its only disadvantage was that it was published in French only, so ASLers in most other countries could not enjoy its content (although often the scenarios were still playable despite the language barrier, as long as they had few SSRs).  For a couple of issues, Tactiques also printed English translations of its magazine content.  Issues #6 and #7 had this supplement; it is unclear if any subsequent issues did.  These appear to have been fairly rare.

Tactiques was the creation of Théophile Monnier and Jean-Luc Bechennec, two Paris-area ASLers who began designing scenarios in late 1990 and decided to start an ASL fanzine.  They tested the waters with a photocopied “Issue #0;” when the reception proved positive, they revised the issue and professionally printed the first issue of Tactiques.  This cost $2,400 for a print run of 1,000 (subsequent issues had varying print runs of either 600 or 1,000); the initial funding came from a wargaming association, the Cercle de stratégie, and from Monnier, Sylvain Ferreira and Laurent Forest.  Bechennec (who would later become editor after Monnier left) supplied the computer hardware.

Each issue contained a variety of ASL-related articles and a number of ASL scenarios.  The quality of the scenarios varied considerably; at first, most of the designers were still relative ASL novices.  But the very success of Tactiques gave them more experience and also attracted other scenario designers.  Tactiques, along with the ASL News, really helped to create the French-Belgian ASL community.

Tactiques Issue #1 debuted in December 1991 as a 48-page magazine that included 10 scenarios.  Article content included pieces on Canada in World War II, the 90th Panzer Grenadier division, the battle of Casa Bérardi, and a complete Advanced Sequence of Play.

The 10 scenarios adopted the ASL Annual approach and simulated a variety of different actions, including: 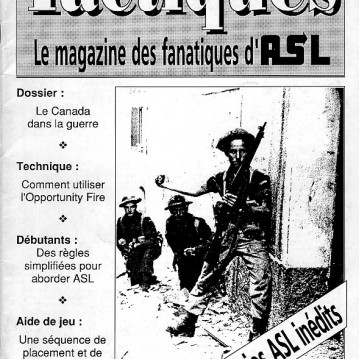