Tactiques #2, which debuted in June 1992, was much like its predecessor:  a 48-page black and white magazine that came with 10 scenarios (as pages of the magazine).

Content includes a focus on Spain in World War II, with historical articles on Spain in World War II (including an article on the Spanish “Blue” Division that provides a suggested ASL TO&E), as well as articles on Leningrad and Finland.  The issue also contains several articles on ASL tactics, including a general article on tactical tips and an article on MG use.  It also contains an AAR of TAC6 (Contre-attaque à Villers-Bocage/Counterattack at Villers-Bocage) and several ASL tables translated into French for the use of French players.

The scenarios, as before, are a variety of actions:

Scenarios include one of the more popular Tactiques scenarios, TAC12 (Commando Schenke), which was later reprinted as an official scenario.  Also worth trying are TAC15 (La Vallée du Tonnerre/The Valley of Thunder), TAC18 (May-Day), and TAC19 (Champs de Noël/Christmas Fields). 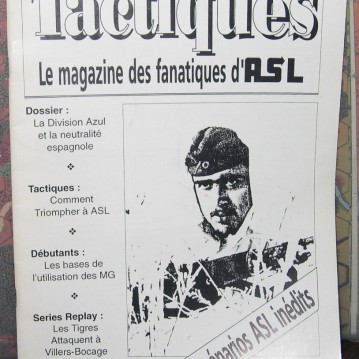