The theme of Tactiques #7 was Tunisia and the first combat actions of the U.S. Army (outside of the Pacific).  The issue includes an article about desert terrain as well as a scenario replay/analysis.

It was this issue of Tactiques that also introduced PBDYO (Platoon-Based Design Your Own), which was a series of rules and charts designed to provide form and substance to ASL’s nebulous and partial DYO rules (in Chapter H) by focusing on particular times and theaters.  The first installments, in this issue, provided information for the Italians and French in Tunisia in 1943-43.

PBDYO was a very interesting concept that basically died before it could catch on, as it did not outlive Tactiques.  How much play PBDYO would have gotten, compared to the competition of actually designed scenarios, is certainly open to question.  But it is possible that PBDYO could have developed a niche audience, like SASL, with the added advantage that PBDYO could even have appearances at tournaments like ASLOK.  It is altogether likely that, in an alternate history of ASL, if Avalon Hill had acquired this concept from Tactiques and developed it, some of us might be playing ASL a different way today.  It is interesting to think about.

Scenarios include a number of good actions, such as the classic TAC51 (L’union Fait la Force/Strength through Unity), TAC54 (Nel Nome Di Roma/In the Name of Rome), and TAC55 (Carrefour Dangereux/Dangerous Crossroads).  TAC52 is also good; it later saw print as an official scenario. 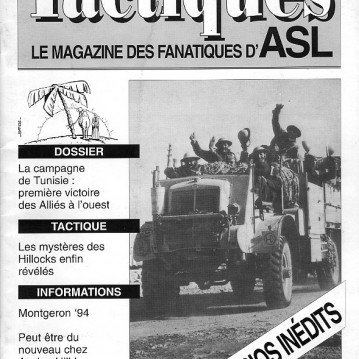