The theme of Tactiques #8 is the fall of Berlin in April 1945 and it includes several articles on this “last act” in Europe.  There is also a lengthy article on air support and a scenario overview.

This issue also provided more materials for the PBDYO (Platoon Based Design Your Own) system, essentially a purchase-based DYO system inspired by campaign games introduced in Tactiques #7.  That issue had PBDYO information for the Italians and the French in Tunisia in 1942-43.  Tactiques #8 includes the main PBDYO rules.  It also provides the required nationality charts for the Germans and the Soviets on the East Front in 1945.  Included also are two PBDYO “scenarios,” PBDYO TAC1 (Le Ciel Et La Boue), set in Tunsia in 1942 between Free French and Italians, and PBDYO TAC2 (Les Sentiers de La Gloire), taking place in Germany in 1945 between the Soviets and the Germans.

This issue did not have any outstanding scenarios, but worth trying is TAC64 (Tenez vos Positions!/Hold Your Ground!). 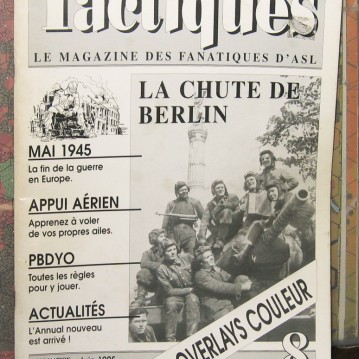