All good things must come to an end and no one knows this more than ASLers, who have seen many things disappear, from opponents to events to designers and publishers.  Tactiques, innovative and ahead of its time, was the preeminent third party publisher during its lifetime, 1991-1995.  Only towards the end did any competition begin to emerge, an ocean away in the United States.  Like replicants in Blade Runner, Tactiques blazed brightly but not for very long.  Its death should be lamented.

The final issue of Tactiques had a focus on the Russo-Japanese clash at Nomonhan in 1939, with several articles on that subject.  There is also an overview of the Japanese in ASL, designers’ notes for the included scenarios, PBDYO materials (charts, scenarios) for the Japanese and Soviets in the Far East during 1937-1940, an an article on routing, and an article analyzing conducting and defending against a Banzai Charge.

Tactiques #9 also had a “mini-campagne” allowing players to link together four scenarios together from issues #8 and #9 that take place in Berlin 1945 into a campaign game.

Scenarios include the very good TAC72 (Engagement pour un Tour/Combat for a Tower), as well as TAC71 (Terminus Sened).

English translations of the scenarios, the mini-campaign and PBDYO can be downloaded here. 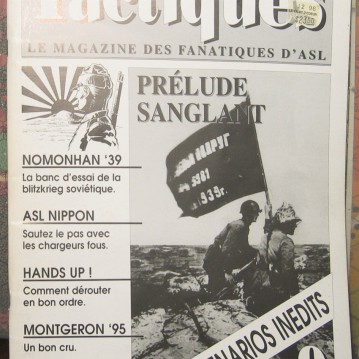