In 2012, the Texas ASL Club came out with a scenario pack.  This is somewhat equivalent to those stories one hears about a 65-year-old grandma graduating from college.  After all, the Texas ASLers had been around for well over 20 years with nary a glint of a scenario pack in their eyes.  They did newsletters, they did tournaments, and they certainly playtested for and associated with scenario designers (especially what would become Bounding Fire Productions), but they didn’t do scenarios.  And then, one year, all of a sudden, wham, bam, thank you, ma’am, they’ve got a scenario pack out.  Congratulations on your degree, Gee-maw!

If the outside of the Dos Equis pack looks oddly familiar, so too will the inside.  That’s because the scenario layout and graphics were borrowed from Bounding Fire Productions, which has a longstanding interrelationship with the Texas ASL Club.  At first glance, any ASLer would certainly think he was looking at a Bounding Fire Productions scenario.  The only downside to this is that some of the print–especially the SSR print–is quite small.

The 10 included scenarios are basically meat-and-potatoes fare, in terms of place and nationality; there are no exotic or rare situations depicted here.  Virtually all of the scenarios are American-German or Soviet-German; the most “exotic” a scenario gets here is a single Soviet-Romanian scenario.  This may seem like an implied criticism, but it is not; merely a description.  There’s nothing wrong with going back to the basics from time to time.

The scenarios overwhelmingly tend to be medium or large in size, though a few of them are  tournament-capable.  Overall, they tend to be vehicle heavy–8 of the 10 scenarios have at least one side with 8 or more AFVs.  The scenarios also tend to be fairly SSR-intensive.  Four scenarios use OBA; one scenario uses Air Support.   One scenario, TX-2 (Last Gasp of the Wacht am Rhein), uses the Mist and Fuel Shortage rules from Kampfgruppe Peiper; this is also an all-AFV scenario.  Another scenario, TX-10 (The Middle of Nowhere) is interesting in that its two boards are determined randomly from among boards 26-31 (given that these are desert boards, it may make little difference).  This scenario uses Steppe Terrain rules.

TX-1 (Beware the Hare), which depicts a German assault on some scattered Soviet multi-hex buildings, is one of the smaller and more tournament-friendly scenarios and may receive more play than some others (if so, the Germans need some balancing help).

A number of the scenarios feature interesting tweaks or aspects.  TX-3 (Ruined in a Day), the Soviet-Romanian scenario, is interesting in that, prior to setup, the Soviet player must select from one of two very different alternate OBs–one that is a substantial infantry force and the other a far weaker infantry force with a large number of AFVs.  Depending on which is selected, the scenario will likely have a very different feel to it.  TX-4 (Corporal Punishment) features German SMC that can act as “artillery leaders,” modifying their fire as if they were SW.  TX-5 (Rush Hour) features secret simultaneous setup for both players–a feature that some ASLers love and others hate.  It is one of the more played scenarios in the pack.  Also played a lot has been TX6 (Tough Enough). Several scenarios have immediate victory conditions, which can lead to tense situations.

Overall, it looks like a pretty decent scenario pack.  Hats off to the Texas ASL Club for releasing it, and hats off to the club as well for 20 years of ASL tournament goodness.

2013 Update:  Sometime between its initial release and August 2013, a second edition of this pack was released, incorporating “all known errata” at the time. 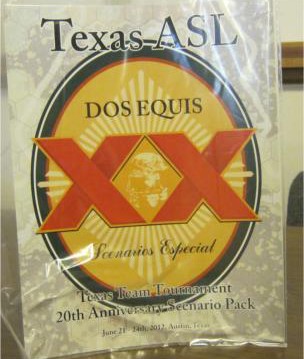