Break Contact’s sophomore effort is quite similar to its first, containing 7 mostly tournament-sized scenarios, many of them featuring Australian troops.  However, the scenarios cards contain a different (and much improved) layout, including original counter artwork.

The title of the pack is a tad misleading, as only some of the scenarios have any AFVs at all.  Like its predecessor, it contains a healthy helping of PTO scenarios (4 of 7), making Break Contact one of the few ASL publishers exhibiting a true commitment to the PTO.  Three of the PTO scenarios are set in New Guinea and one on Bougainville.  Other scenarios are set in Syria 1941, Italy 1943 and even South Korea 1950.

Most of the scenarios are small in size; it is not unusual for both sides in a Break Contact scenario to have fewer than 10 squads per side.  The big exception is BC12 (Itson), also the most unusual scenario in the pack.  This Australian-Japanese scenario, set on Bougainville in 1945, uses an area slightly less than a half-board, but features 44 Japanese squads (yes, you read that correctly) attacking a fortified position defended by 16 elite Australian squads and 3 Matilda tanks.  Those ASLers who dared tackle this mini-monster scenario at ASLOK 2007 enjoyed it.

Another scenario that might draw the eyes of ASLers looking for something different is BC10 (Groff’s Grief), set in Seoul, Korea, in 1950, in the wake of the Inchon landings.  This DASL scenario features city fighting between USMC and North Korean forces (the latter using Russian counters).  The USMC use 7-6-8 squads and are loaded with SW.  If that weren’t enough, they are accompanied by 2 Pershing tanks.  The North Koreans get both Tank Hunter Heroes and Dare-Death Squads. 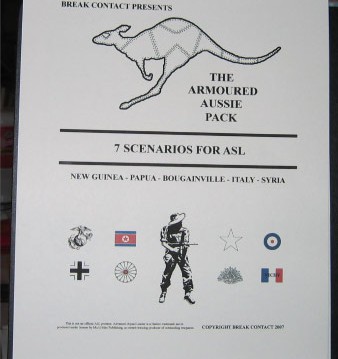