In early 2011, Break Contact emerged from a period of relative inactivity to release two new items, one of which is this product, The Aussie Battler Pack (ABP), a scenario pack very much in the mold of Break Contact! and The Armoured Aussie Pack.   It has an emphasis on actions involving Australian troops, with a few trips further afield.

Other actions depicted include American mopping-up actions in the Philippines in 1945, a Chinese-Japanese clash at Nanking in 1937, a British (Arab Legion)-Vichy French action in Syria in 1941, and even a Soviet-German action at Kursk, the latter of which almost seems out of character for Break Contact.  Because of the too-expansive layout of the scenarios, which uses up considerable space, almost every scenario takes two pages to display.

The ABP is, in general, an imaginative pack, with interesting scenario situations. Two in particular are worth mentioning.  BC17 (Forlorn Fury), the Chinese-Japanese Nanking scenario, is an interesting way to deal with a perennial problem that designers of scenarios set in China face:  how to represent city walls in ASL.   Many older cities in China have a pre-gunpowder-era city wall around what is now the inner city; these walls were sometimes more than 20 feet high (and thick).  Though they cannot withstand artillery, they nevertheless represent knotty tactical problems while still standing, and the Japanese had to find ways to overcome these substantial obstacles.  BC17 uses Board 23, the “canal” board, with the canal representing the city walls and the bridges over the canal as gatehouses.  The Japanese must assault through one or more of these gatehouses, or a breach in the wall that is created through a novel and imaginative mechanism.  Prior to setup, the Japanese player records three potential rubbled wall hexes.  After Chinese set up, rubble counters are placed in those hexes.  Each player must then remove a rubble counter, starting with the Chinese player, so that there is one rubbled wall hex left, which is the one used.  Smart.

BC18 (Ghosts in the Machine) also has an interesting mechanism.   This scenario, a rare East Front Night scenario, has two bridges (a two-lane stone bridge and a foot bridge) across the Board 7 river.  However, in a sort of ASL representation of Schrödinger’s cat, until a player is in a position to observe the two bridges, they are both everywhere and nowhere.  When one of the players first sees one of the potential bridge hexes, both bridges are randomly placed at two of three potential crossing sites.  Thus which site will have which bridge, or no bridge at all, not only will vary in each playing of the scenario, but will also be unknown until a point during the playing of the scenario.  Nice.

The Aussie Battler Pack looks good; it has some interesting situations and some intelligent scenario mechanisms.  If it could put more of the scenarios on single scenario cards, it would be even better, but even with this flaw, the pack appears well worth getting.  For some reason, it has had very little play–perhaps because of lack of availability?–but it is certainly worth trying. 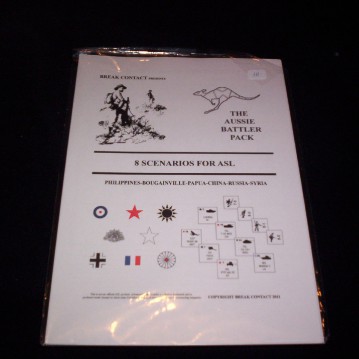