Home > Products > The Battle for the Abbaye de Ardennes

The Battle for the Abbaye de Ardennes (BAA) is a small scenario pack created by the Lone Canuck, George Kelln, but never offered for sale.  Instead, Kelln only made them available to ASL tournament directors to give out as prizes–making them quite rare ASL items.

According to George Kelln, BAA began as a set of scenarios designed for a huge 85 x 110 map, presumably historical in nature, but this was not practical to publish as a product, so the scenarios were converted to play on geomorphic mapboards.  “While these scenarios at first appear to be quite large,” Kelln explained, “it was deemed too difficult to shrink down to a size that would still allow both sides to recreate this action.  Thus…I have opted to place the units…on a battlefield which best represents the field of battle in the scenario and then let the players ‘duke it out’ to fulfill the scenario’s Victory Conditions.  It is thusly why I have decided not to sell the pack and use it only for a prize.”

As a result, the only people with copies of this product will be prize-winners and people with literal copies (i.e., photocopies/scans) of BAA.

The scenarios (with one exception) depict parts of Operation Charnwood, the British/Canadian attempt to capture Caen in Normandy on July 8, 1944.  The seventh scenario is a “bonus” scenario depicting the 12th SS “Hitler Jugend” Panzer Division’s attack on the Canadian 9th Brigade at Authie on June 7, 1944.

The scenarios are as follows:

Most of the scenarios feature a large British force attacking a smaller Waffen SS force with various fortifications, OBA, etc.  The only German attack is that in the “bonus” Authie scenario.

Thanks to Jesús Pié i Batlle, Mark Sockwell, and Pete Phillipps for information on this pack. 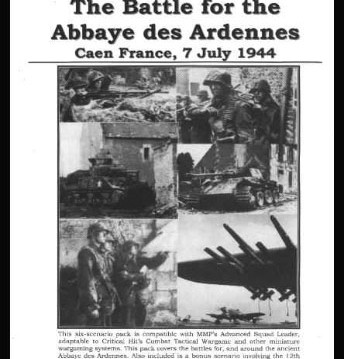