The first of George Kelln’s Canadians in Italy series, The Red Patch Devils in Sunny Sicily (CiI1), presents 8 scenarios featuring the 1st Canadian Division on Sicily in the summer of 1943.  It also includes–for the first and only time in a Lone Canuck ASL publication–a booklet with historical information on the role played by the Canadians on Sicily.  In the scenario pack, the utterly green Canadians are rather generously represented as elite troops.

The scenarios in CiI1 tend towards the large.  There are no small scenarios, only 2 medium-sized scenarios and 6 large scenarios.  As is typical for George Kelln products of this period, a number of the scenarios feature large numbers of AFVs.  In one scenario, for example, the Canadians have 10 Sherman tanks, and in another they have 8.  The Canadians are the attackers in every scenario.

Four of the scenarios have OBA; one scenario has Air Support.  There are no Night scenarios.  Two of the scenarios, CiI1-1 (Monty’s Big Left Hook) andCiI1-6 (Whistling Hill) , gratifyingly feature one of the geomorphic mapboards from Heat of Battle’s High Ground!

This pack was the fourth pack that George Kelln released in the year 2002 alone, a rate of publication that simply has to raise quality control issues.  Could all these scenarios created by a one-man operation have been adequately playtested and developed?

The records of many of the scenarios in these early packs, including this one, suggests that the answer is no.  Consequently, approach these scenarios at your own risk. 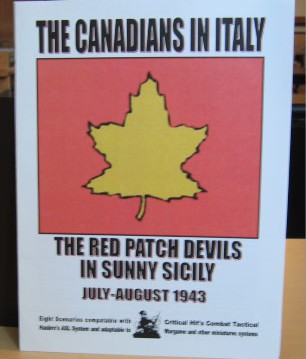