Contents:
Desperation Morale has not examined his product and cannot confirm claims of its alleged contents. The product seems to have a historical map formed from 9 (?) glossy 12" x 18" heavy paper/light cardstock map panels, 4 pages rules, 8 scenarios, and 2 1/2" countersheets (560 counters) and 2 5/8" half-countersheets (176 counters), for 736 die-cut counters total.

In May 1941, the Germans launched an audacious attempt to take the Greek island of Crete from the Greeks and British/Commonwealth by air, landing parachute troops to simultaneously seize three key airfields–at Maleme, Heraklion, and Rethymno (Retimo).  Heraklion, the easternmost of the three airfields, was defended by a British brigade with an attached Australian battalion, some Greek battalions, and odds and ends, including a handful of light tanks. The Germans, who seriously underestimated the number of Allied troops at Heraklion, dropped only a parachute regiment with an attached battalion (and a light AA battalion, too) to seize the airfield and nearby town. The British tore the initial landing force to shreds, leaving the Germans just hanging on.  Eventually they were reinforced with troops from elsewhere on the island, but still failed to take the airfield. It wasn’t until the British decided to evacuate the entire island that the Germans managed to walk in afterwards, bloodied and bruised.

This is a situation that makes for a good ASL module–hard fighting in a compact area with interesting terrain and a bit of novelty.  Perhaps some day, a reputable ASL publisher will take a crack at it.  Until then, there is this.

Critical Hit’s Heraklion module is built around an attractive historical map of the Heraklion airfield and the surrounding hills (Heraklion itself, or its outskirts, appears on the edge of the map).  The artwork is good, with some nice detail, such as airplane wrecks.  There are, however, slopes, though Critical Hit uses its patented “slope light” rules.

There aren’t many rules, though–just a couple pages of them. While this may get you into the game faster, it means there isn’t much in the way of chrome or historical detail.

Only 8 scenarios come with the module, one of which no one will want to play, as it is merely German aircraft trying to knock out British guns.  The scenarios are mostly small or medium in size, without a lot of meaty actions. The mix does include one monster historical scenario, DV8 (Black Watch, Death Watch), which uses the whole map and takes the place of any campaign game. 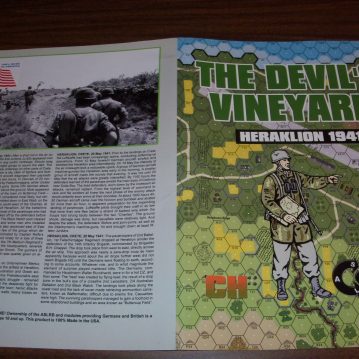