Perennial scenario designer Paul Kenny has always been interested in the role played by the Dutch in World War II and because of this interest has been the source for most of the Dutch-related ASL content.  The not very imaginatively named The Dutch Pack continues and expands this interest, presenting a dozen scenarios featuring the Dutch, set either in the 1940 campaign or the 1942 Java campaign.

The scenarios come on cardstock and are printed in color with the original artwork style that Kenny introduced a couple of packs previously.  The artwork is simple but shows how even the simplest of line drawings can make third party publisher scenario cards more attractive.  A partial page of rules introduces a new troop type, Landstrom Troops (native Indonesian troops), as well as new armored cars and a new artillery piece (counters are not provided for the vehicles or gun; the Landstrom MMC use Axis Minor counters).

As with many Fanatic Enterprise packs, proofreading and editing are indifferent.  In FE163 (Shadow Enemy), for example, the scenario card has the “Japanese” moving first, but the Japanese do not appear in the scenario (it should be Sumatrans).  The scenario contains other references to Japanese as well.  That same scenario has an SSR stating that the Sumatrans can perform Banzai Charges, with the exception that they only need one MMC per hex–an exception that one would think would apply to Human Waves, not Banzai Charges.

The scenarios are equally divided between 1940 and 1942.  The Americans, French and British guest star in a couple of scenarios; one scenario features Dutch versus Sumatran Muslim partisans.  Four scenarios are small in size, and one is medium-sized; the remaining scenarios are all large to very large.  The Dutch are the defenders in almost all of the scenarios.

Two scenarios, FE 156 (Ypenburg Airfield) and FE158 (ABDA Command), use board FE1, which appeared in the Budapest Pack.

One scenario, FE 155 (Moerdijk Massacre) features an air landing.  OBA appears in three scenarios; air support in one (for both sides).  One scenario features in-season Paddies; one scenario is a Night scenario.

In the six years since its release, not a single player has recorded a playing from this pack to ROAR. 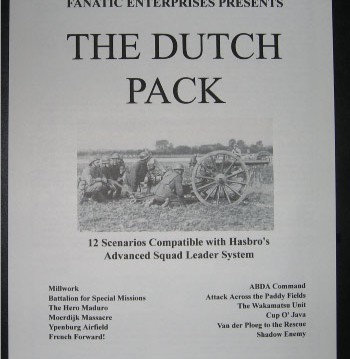