Contents:
Newsletter with 2 scenarios per issue

The Forward Observer was a short-lived ASL newsletter published by Scott Faulk and Steve Svare of the Coastal Fortress Web site (a much applauded but also short-lived ASL Web site).  It only published 2 issues, each in freely downloadable PDF format, before folding.

Issue #1, Summer 2001, 16 pages (including 2 scenarios).  Content includes a historical article on the “highest battle of World War II,” a very good article (and play aid) by Tom Repetti on prisoners and unarmed units in ASL, an ASL crossword puzzle, and an interview with Barry Johnston of the Atlanta Area ASL Group.  The two scenarios include FO1 (Come Seven Come Eleven) and FO2 (Friendly Fire), both designed by Pete Shelling.  They were later republished in the ASLOK XX “20th Anniversary Pack” by Partisan Publishing.

Issue #2, Fall 2001, 20 pages and 2 scenarios.  Content includes an article on the Battle of the Reichswald, an article on bunkers and pillboxes in ASL, an interview with members of the Southern Kansas ASL Club, an incremental close combat table, designers notes, and an ASL crossword puzzle.  The two scenarios include FO3 (One Story Town) and FO4 (Catcher in the Kunai).

FO4 Catcher in the Kunai. New Guinea 1942 (Americans vs. Japanese). 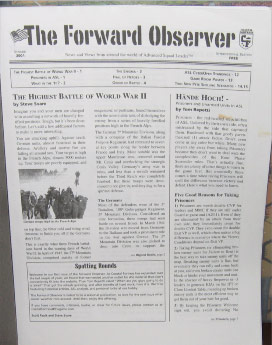