The General was the long-running house magazine published by Avalon Hill to promote and supplement its line of board wargames.  Issues of The General included articles on game strategy, history, variants, game replays, and more.  Occasionally variant counters or other game materials would see print.  Ostensibly published 6 times a year, it fell farther and farther behind in its last 12 years of publication.

The General covered ASL regularly from shortly after the game’s publication until the magazine’s demise. One 1986 issue–Volume 22, Issue 6–introduced and focused on ASL, setting the stage for future issues to come.

The most common feature was a long-running “column” on SL/ASL, Squad Leader Clinic, by Jon Mishcon; however, the Clinic’s actual useful content was relatively slight.  From time to time, more substantial articles would appear in The General (many of these were later collected and published as “ASL Classic.”

The General was also a regular source of ASL scenarios.  At first, such scenarios appeared irregularly, but in its last years, nearly every issue of The General would feature one or two ASL scenarios.  Almost 90 ASL scenarios were published in the pages of The General, including a number of classics such as G6 (Rocket’s Red Glare),  T1 (Gavin Take), T4 (Shklov’s Labors Lost), and the Squad Leader remakes, A (Guards Counterattack) and E (Hill 621),  among others.  The scenarios also included a fanciful scenario making use of a map appearing in an Avalon Hill Civil War game (not listed below, but appearing in Volume 22, Number 5).

One issue of The General, Volume 28 Number 6, contained a small countersheet with variant counters for several Avalon Hill games, including several German and French ASL counters to fix errors in their original versions.

Another issue, Volume 30 Number 3, included corrected DASL overlays.  They had originally come with the ASL Annual 95, but had been printed at the wrong size.  The overlays in The General corrected the sizing error.

The ASL scenario contents of The General are as follows (links are to digitized copies of these magazines available at the Internet Archives): 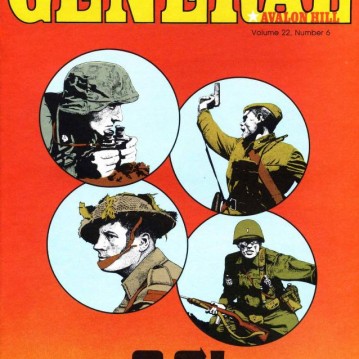