Although from its beginning, ASL had an international audience, the rise of the Internet in the 1990s allowed a truly global community of ASL players to develop.  However, one ASL audience has never quite merged with the rest of the global ASL community:  the Japanese ASL community.  Yet there are Japanese fans of ASL (and various blogs and Web sites devoted ot it); it is just that most “Westerners” remain largely unaware of them.

The Last Stand is the output of one Japanese fan of ASL, Suzuki Takuya (who has provided unofficial translations of ASL materials to the Japanese audience for some time; he has a blog at http://ameblo.jp/thelaststand).  It is a general wargaming magazine, with articles, reviews, and AARs of a number of different wargames, but each issue contains at least some ASL content, usually a rules article or AAR.  Some of the content originally appeared in English-language publications but has been (with permission) translated into Japanese.

Issue 3 of The Last Stand contained Japanese versions of the two Java scenarios that appear in the Scenario Designers Guide, reprinted with permission from Desperation Morale.

Issue 4 of The Last Stand, dubbed “All About ASL,” is an all-ASL issue of the magazine.  At 144 pages, it provides a great amount of content.  Much of the content is heavily-illustrated rules articles, but there are also AARs and other types of content.  Moreover, Issue 4 contains 10 scenarios–and not just any scenarios.  Louie Tokarz graciously gave permission to Suzuki Takuya to translate the famous “Windy City Wargamer” scenarios into Japanese, thus allowing Japanese-speaking ASLers to play them for the first time.

The Last Stand must take quite a bit of effort to produce, and it is really nice to see ASL materials like this coming out of Japan; hopefully in the future there will be more such material, and hopefully more Japanese ASLers will be interested in interacting with the rest of the global ASL community. 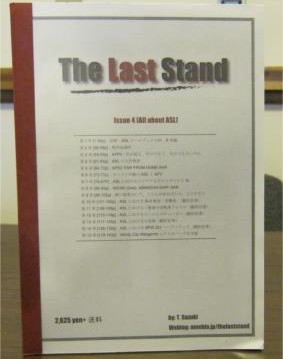