Fecund scenario designer Paul Kenny released The Oblivion Pack very shortly after MMP released the Axis Minors core module Armies of Oblivion.  Paul had been one of the people to work on AOO, and thus had access to all the Chapter H information from the module; he designed the Oblivion Pack in part while work on AOO was still ongoing, planning to release it after the module appeared.  He didn’t realize he would have such a long wait, but at last, in 2006, AOO appeared.

The scenario pack has colored flags for the different nationalities, but otherwise is in black and white with no counter art.  The proofreading and quality control is poor. The historical accuracy is also often suspect.  In one scenario, for example, the German forces are simply referred to as “Remnants of Army Group F.”  That’s the same as saying “I have no idea whatsoever.”

The scenario mix is not optimum.  There are no small scenarios and 4 medium-sized scenarios; the remainder are all large.   This was somewhat disappointing at the time, as one of the few criticisms of Armies of Oblivion was that so many of its scenarios were so large.  Many ASLers were looking for scenarios that were smaller and quicker to play, but The Oblivion Pack really didn’t deliver this.

The scenarios have seen little play since their release. 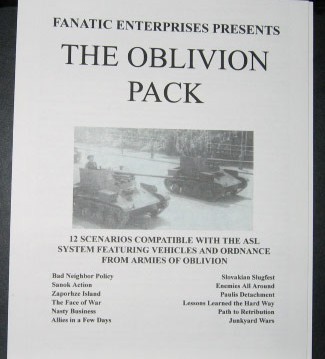