The Steelworks is a small historical module from Lone Canuck Productions that depicts a brigade-sized British raid-like action in July 1944 in Normandy designed to destroy the towering smokestacks attached to a steel factory outside Caen because the Germans had been using the high stacks as observation posts.  The British attack ran into unexpectedly fierce German resistance, thanks in part to the recently-arrived presence of a Tiger battalion and failed.  A subsequent German counterattack chased the British back.

The historical map is thus the core component of the product.  At 34″ x 26″ it’s bulky and may be a bit too wide for some gaming tables.  It depicts the battered Steelworks and associated outbuildings, the huge swirl of railroads that surround and intertwine with the Steelworks (there may be no map in ASL that has more railroad hexes on it), and the surrounding farms and village of Colombelles. The central area is filled with debris, rubble, and shellholes. The tones of the map are muted and a bit drab but the artwork is satisfactory.

Half of the 8 looseleaf, hole-punched pages of rules are devoted to historical summary; most of the rest details the terrain in the module, including smoke stacks and storage tanks, tilled fields, various building types, gutted/roofless buildings, and burnt-out orchards.  There’s nothing particularly difficult or advanced here and players will be able to pick up the rules quickly.

Rules are also included for new counter types, including new MMC for a Luftwaffe field division. The basica squad for theis unit is a 44-7 2nd-line squad with a broken morale of 6. The unit’s fusilier battalion is represented by a different squad type, a 5-4-7 2nd-line squad with advancing fire and assault fire. There are also new British counters, including for Bangalore Torpedoes and Hayrick DCs (sort of a DC on steroids), as well as a far more dubious SMC: the Piper.  Piper counters are 0-0-9 SMC counters that essentially increase the morale level of other units in the same location by one.  There are five full paragraphs of Piper rules and they are as popular with Your Humble Author as actual bagpipes are.

The new German squad types and the British SW and Pipers are included as counters in a half-sheet of 140 die-cut counters that also include 20 German SMC, 10 German concealment markers, and some British Assault Engineer MMC. The quality of the counters appears generally good.

The Steelworks comes with 5 scenarios, which isn’t very much and (in the absence of a campaign game) also means that if one or two are not to your taste you may get a limited amount of play value out of the product. The scenarios include:

An observant reader will have noticed that several of the scenarios here feature a typical Lone Canuck idiosyncrasy, which is to give one or both sides in a scenario a ridiculously high number of SW.

With no campaign game and only 5 scenarios (one of which is a Night scenario), The Steelworks is a bit disappointing. However, the historical map is not a typical ASL historical map and some ASLers may want to find out what playing on it is like.

PS: Purchasers may want to also obtain a somewhat larger ziploc bag than the one that comes with the product, as the map only fits in the included bag with effort. 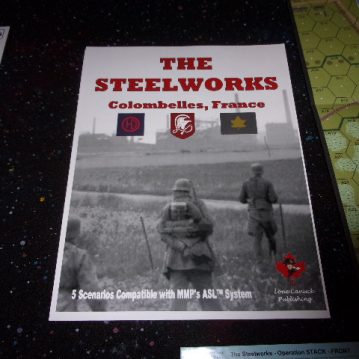