The Wargamer was a bimonthly wargaming magazine founded by Keith Poulter in Great Britain in 1977 that originally included a wargame in each issue.  After 62 issues, in 1987, when Poulter acquired the similar magazine Strategy & Tactics, the games were dropped from The Wargamer (from then on known as “Volume 2” of the Wargamer) and it focused instead on reviews, strategy and analysis articles, as well as scenarios and variants.

The Wargamer did not pay much attention to ASL, but several “Volume 2” issues featured scenarios. 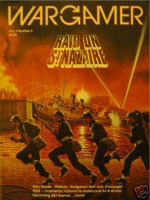