One of Critical Hit’s “latter day” historical modules for ASL (i.e., a conversion of a previously printed ATS module), Tigers to the Front! (TTF) depicts the June 1944 Soviet attempts to crack the “Panther Line,” a ragged defensive line established by the Germans after being pushed away from Leningrad.  Many of its scenarios feature the 502nd Schwere Panzer Abteilung, equipped with Tiger tanks, which was rushed to the defense.  TTF, or to give its overlong full name, Tigers to the Front!  The Summer of ’44 on the Eastern Front, was designed and developed by Mark Porterfield and David Lamb.

The centerpiece of TTF is its large historical map, which is centered on a fortified hill position.  The map is very attractive, with typical mid-2000s Critical Hit map graphics, dominated by green and brown earth-tones.  Alas, as do other Critical Hit maps of this size in this era, it is awkwardly folded (in order to fit into a ziplock bag), which necessitates lamination or plexiglass to play on the map with ease.

Most of the scenarios are medium-sized, with a few large and small ones to add spice.  The largest is TTF4 (Tigers on ‘The Balcony’), which features a wild and wooly contest over the entire map.  Tigers, flamethrowers, OBA, air support, and all sorts of other tanks and guns range freely over the battlefield.  The scenario special rules are typically quite light, save for the occasional air support or OBA, and there really isn’t much special terrain to have to get used to, so players can start playing right away.

Tigers to the Front! looks interesting for any fan of East Front action.

2nd Edition comments:  In 2006, Critical Hit announced on its Web site a “2nd Edition” of TTF with a “newly printed” map.  However, based on the map graphic on its Web site, it is difficult to see any differences between it and the 1st edition map.  No other changes are mentioned.

3rd Edition (Panther Line) comments:  In 2012, as part of the 2011-2012 attempt by Critical Hit to re-issue nearly its entire product line with updated counter graphics, Tigers to the Front! was reprinted and re-released as Panther Line (presumably so that retailers and consumers would purchase it all over again).  The map is basically the same as previous iterations (which were fine), and the counters are completely gratuitous (note that the original had no counters), all being duplicates of basic German counters found in any copy of Beyond Valor (and not as nice as official counters, either).  That leaves the scenarios as the only reason why someone who owned an earlier edition might want to purchase Panther Line.  All of the Panther Line scenarios are marked “ver. 1.3,” indicating they have been changed in some way from the original, either to incorporate errata, to change play balance, or simply arbitrarily (as CH sometimes does).  There are two additional scenarios included that use the historical map.  PL#11 (All In A Night’s Work) is a tiny Night scenario that is SSR intensive.  PL#12 (Hammer and Anvil) is a large scenario depicting a Soviet attack (it contains OBA and AIr Support).  In addition, a geomorphic map scenario, PL Bonus #1 (Grünewald Grind) is included; this had already been reprinted recently in Retro Pak 1 (and before that as well; it is one of those scenarios that Critical Hit perpetually recycles).

4th Edition (Suwejo Heights) comments:  Once more Critical Hit has renamed and re-released Panther Line, this time as Suwejo Heights.  Though it is dubbed the “last word edition,” the notion that this will be the last word is risible indeed.  The fourth time around, Critical Hit has dropped the gratuitous counters (though CH’s website and the product packaging both falsely make the product seem as if it contains counters); instead, the rationalization for this particular edition is the new map style, which Critical Hit has adopted for all its products.  Suwejo Heights uses 4 12″ x 16″ glossy heavy paper map panels, which must be assembled to form the map.  Gamers have demonstrated over the years that they do not care for assembling big maps out of many tiny ones, but with just four panels, Suwejo Heights is not too bad.  The glossy coating will cause glare, but on the other hand, it makes the colors bright and stand out-y.  Overall, it is probably an improvement over the very muted tones of past editions.  The artwork itself has been slightly reworked, generally for the better.  The scenarios all say Version 1.3.  The 4 pages of “rules” actually contain very few rules; this product can be leaped into immediately.  Overall, this is a nice edition.  The big problem is the cost:  the very modest components of this product cost a hefty $69.95 (as of this writing, the previous edition is still in print and is considerably cheaper). 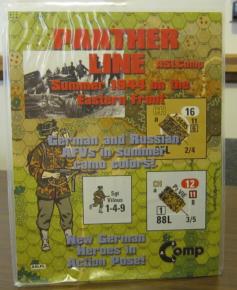