Alternative Titles/Edition History:
aka The Battle of the Bulge 50th Anniversary

When it debuted in December 1994, Time on Target Issue #1 (TOT1) billed itself as the “Newsletter (later Magazine) of ASL Esoterica.”  It would certainly live up to that reputation.  Created by Mark Neukom and John Knowles, it was a short magazine whose real attraction were its inserts:  12 ASL scenarios on cardstock related to the issue’s theme, the Battle of the Bulge.  The scenario cards, printed with red and black, were near-perfect, demonstrating the new heights of physical quality that Kinetic Energy had taken the 1990s third party ASL publishing world to.  In future issues it would ascend to still greater heights with attractive die-cut counters nearly indistinguishable from “official” counters.  Each issue continued the idea of a theme around which all the scenarios would be designed.

Even in its first issue, TOT demonstrated that it would live up to its self-description of a magazine of “ASL Esoterica.”  TOT1 introduced the first of its infamous TOT SSRs, super-lengthy SSRs designed to introduce a maximum of realism into some aspect of ASL.  These SSRs would eventually include Bayonet Charges, AFV Supplemental Armor, SS Unit Replacement, German Marines, Hasty Roadblocks, and Tree Nurseries.  Similarly, Chapter H vehicle notes introduced by Kinetic Energy stood a decent chance of being long and complicated.  For some, these ultra-detailed rules were just more than they cared for, above and beyond the already complex standard ASL rules.  For others, the added realism and novelty were just what the doctor ordered.

TOT1 had only 12 pages, which makes its initial designation as a “newsletter” rather suitable.  It also included 12 scenarios as cardstock inserts, something that was typically not done at the time, but was much welcomed by ASLers.

TOT1 is probably the least collectible of the three issues of TOT because it is the only one not to include any counters.  Its article content is limited, consisting of an introductory article, a brief article explaining the rationale behind the Bayonet Charge SSR, designers’ notes by Mark Neukom and John Knowles on the scenarios they designed, a detailed article on AFV supplemental armor in World War II, and two special SSRs, each taking up half a page of rules, one on bayonet charges and one on AFV supplemental armor.

The supplemental armor rule perfectly illustrates the KE philosophy.  It consists of 13 paragraphs of rules (not counting examples) to add quite minor effects to the basic ASL system.  Essentially the same effects could have been created in a brief scenario SSR by slightly raising an armor factor or two and possibly decreasing a movement factor.  Kinetic Energy special rules create the illusion of greater realism but at a sometimes serious cost in complexity.

The scenarios in TOT1 all take place during the Battle of the Bulge.  Three are small in size, two are medium, and the rest are large–but large typically due to the number of vehicles as opposed to infantry units.  In all, it is a good range of sizes.  One scenario–TOT3 (The Pride of Lions)–uses DASL boards.  Three scenarios use the Stoumont map from Kampfgruppe Peiper:  TOT4 (Stoumont: The Break-in),  TOT5 (Retrograde out of Stoumont), TOT6 (Bastard Tanks & Shootin’ Fools). The rest use normal geomorphic mapboards.

Two scenarios are night scenarios (and a third uses freedom of movement restrictions and cloaking but is not technically a night scenario), while five use the heavy mist rules from Kampfgruppe Peiper.  Half the scenarios have OBA of some sort.  Few of the scenarios could be considered SSR light, but only one, TOT12 (Hill 490), is SSR dense.

Since TOT1’s publication, many of the scenarios have gotten quite a bit of playing.  Unfortunately, a number of them are imbalanced, including the most popular scenario in the pack, TOT7 (Tiger 222, a tight little tournament sized scenario), as well as TOT8 (Nightmare), and TOT11 (Bitter Reply).  A better bet is TOT5 (Retrograde out of Stoumont), one of the scenarios that uses the Stoumont map.

TOT1 overall is interesting and worth seeking out, but it is probably nicer-looking than nicer-playing, which was sometimes a problem for Kinetic Energy. 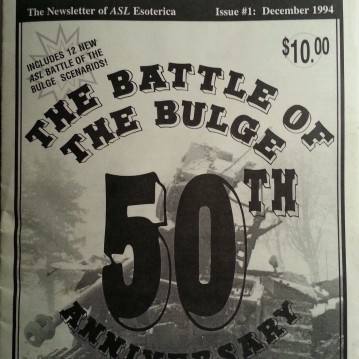