Alternative Titles/Edition History:
aka April 1945: At the Sharp End

The second issue of Time on Target (TOT2), published a year after the first, concentrates on British-German actions (with a few lonely Hungarians thrown into the mix) in April 1945 in the waning weeks of the war.  The theme was inspired by John Russell’s book, No Triumphant Procession, which focuses on the late-war fighting between the German 2nd Marine Division and British units from the VII and XII Corps.

The article content includes a paen to the use of rubber cement for overlays, designer’s notes and playtest observations by Mike Reed, a review of No Triumphant Procession, a historical overview of the actions, designer’s notes by Mark Neukom, an interview with Don Petros, and a quantitative article on LATW hit probabilities.

The 20 scenarios have an excellent range of sizes, including 5 small ones, 8 medium-sized scenarios, and 7 largish actions.  One scenario, TOT26 (Free-For-All) uses DASL boards.  Two scenarios, TOT20 (Threat to a Bridgehead) and TOT29 (Tiger Hunt), use the Stoumont map from Kampfgruppe Peiper (obviously Kinetic Energy’s favorite map) as non-Stoumont terrain.  The rest use standard geomorphic maps.

Fully 11 of the 20 scenarios use OBA (many with the OP tank counters included with the magazine), while four scenarios are night scenarios.  Hungarians make guest appearances in two scenarios.  Many of the scenarios are fairly SSR dense.  TOT29 (Tiger Hunt) is also SSR dense, but this is because Tiger Hunt is a special 3-part scenario, each a small scenario that is 6 turns long.  Much of the SSRs deal with this unusual tripartite structure; aside from that, the rules aren’t bad.

Scenarios TOT15 (The Steel-Eyed Boys), TOT25 (Franzen’s Roadblock), and TOT28 (Black Friday) were all reprinted with changes (and in color) in March Madness Scenario Pack ’99.  They are more likely to be balanced than the originals.

TOT2 has a number of unbalanced scenarios (some quite so), as was typical for Kinetic Energy, but also includes some good actions in its mix.  These include TOT14 (Panzer-Teufel Strikes Back), TOT23 (This Close to the Sharp End), and TOT32 (Denouement).  In 1995, this was a must-have.  Today, it is probably mostly for collectors. 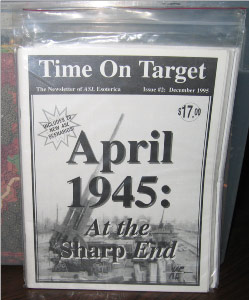