A short armored tactics guide written by Ray Tapio with assistance from various CH principals at the time.  The focus of the pamphlet is on tank vs. tank engagements and how to prevail in them.  However, it does little beyond explain some of the basic odds situation for bounding first fire, bounding fire, hull-down engagements, and so forth.  Armor tactics in ASL are subtle and multi-faceted enough that an enterprising writer could indeed write an in-depth manual on them–but this is not it.  It will not really be that helpful to newbies.

Because the two included scenarios are not particularly noteworthy, either, this is really only for ASL completists.

2nd Edition (Tank Tactics Guide 2014) Comments:  Though nobody had asked for it, in 2014, Critical Hit released a new version of this long out-of-print (yet mostly unsought) manual.  The major difference is that the two scenarios that appeared on small cards that were included with the 1st Edition were replaced (for unknown reasons) with two different scenarios on a single full-sized scenario card.  Both are all-armor scenarios; neither is original–they are re-named repeats.

TT#1 (Mechanical Slaughter) is cribbed and modified from an old French “Assurbanipal” scenario, Tonnerre Mecanique, and it is not clear how Critical Hit has the rights to re-publish it.   It pits 29 Soviet tanks against 13 German tanks (Panthers and Tigers).  TT#2 (Across the Aksay) is a Soviets vs. Germans scenario that was originally published as Panzer Army Popov in the newsletter On All Fronts #72.  It pits 34 Soviet tanks against 21 German tanks.

There is still no reason other than extreme completism to get this product. 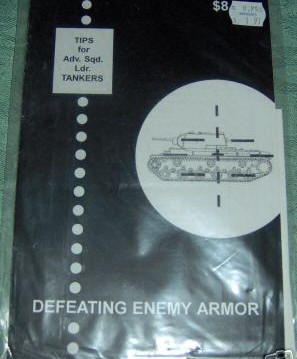