To Battle By Air 2 (TBBA2), a follow-on to a similar product published earlier in the year, features, according to its cover, “six fast pace [sic] scenarios featuring WWII airborne forces of Britain, Canada, Germany, and the United States.”  Designer/publisher George Kelln is continuing his trend of smaller scenario packs featuring scenarios that themselves tend to be smaller than his early offerings.

The theme of this pack, like its predecessor, is airborne forces–not, it should be noted, airborne landings.  The first pack featured only one air drop in six scenarios; TBBA2 includes only a single glider landing scenario. Scenarios include actions set in Holland 1940, France 1944 (2 scenarios), Holland 1944 (2 scenarios) and Germany 1945.  Five of the scenarios are small in size, one is on the low end of medium.  With the exception of the glider landing scenario, none of the scenarios utilize any “advanced” ASL rules such as OBA, Night Rules, Air Support, etc.  All are likely to be very quick and playable.

One of the scenarios, TBBA2-12 (Bridge over the Ijssel), uses Map v from the ASL Starter Kit series.

Note:  This scenario pack also includes a replacement card for a scenario from To Battle By Air 1 that contained errata. 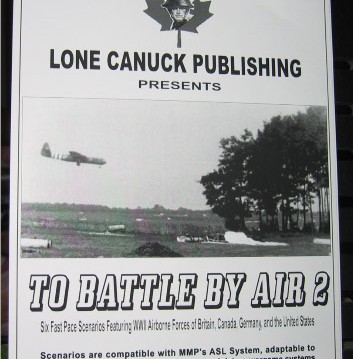