BattleDice are custom made precision dice intended to appeal to ASL player, usually with some sort of ASL-related theme based on color scheme and foil graphics where the “1” pip of a die would usually be.  BattleDice originally debuted in June 2010 at a small Canadian ASL tournament (the “Battle at Beau’s”) run by BattleSchool outside of Ottawa, Canada.

BattleDice are made of cellulose acetate.  To date, they have appeared in white, black, dark red, amber, green, saffron (whatever that is), light blue, and dark blue.  The black and white dice are solid; the colored dice are translucent.  They all have rounded corners.  Depending on the die, the special image may be black or a gold or silver foil.

The dice are custom made by a US firm that manufactures precision dice for casinos in the States and elsewhere. They are NOT engraved. The (foil) logo is applied with a hot-stamp process. The dice meet the same standards for size (to within 5/1000 of an inch) on all sides. The pips are milled out and then filled with paint the same density as the material removed. The paint is applied with a syringe! The dice go through several polishing, milling and quality control steps. With the exception of a logo in place of the “ace,” these dice are no different than precision casino dice featuring a logo between the “twips.”

What debuted at “Beau’s” was the “Tommy” BattleDice, which has a British/Canadian feel to it, thanks to the image of the “Tommy”.  In lieu of the “1” on the die, there is an image of a soldier with a British helmet and the word BattleSchool.

The dice are very attractive.  Being precision dice, they presumably are well-balanced.  BattleSchool says that they are the same quality as dice used by professional backgammon players (and presumably are obtained from a company that makes the same).  The custom images are not engraved; rathery, they are applied using a hot-stamp foil process.

The “Tommy” dice are among the least interesting of the various ASL accessory dice that BattleSchool offers and in some ways can be taken as a “proof of concept” attempt before embarking upon a more ambitious program of dice design and production. 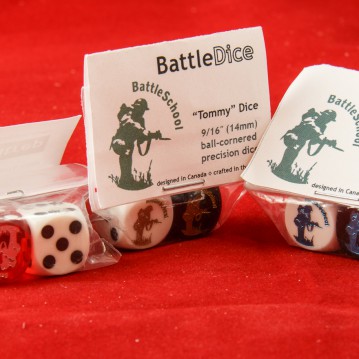