Total East Front Pack 1, along with its sister release, Total Pacific Theatre Pack 1, were supposedly the first of a series of “Phase II” scenario packs, each of which would have a countersheet, overlay sheet, or small map included. Like so many other Critical Hit initiatives, there was no follow up. No “Total East Front Pack 2” ever emerged.

The overlay sheet in this pack is unattractive and provides no real added value.

Probably the most interesting scenario in the pack is TEF1-2 (The Last Waltz), but the pack is nothing to write home about.

2nd Edition (i.e., Ostfront Pak 1) Commentary: In late 2012, Critical Hit republished Total East Front Pack 1 as Ostfront Pak 1, as part of its general plan to hastily revise, rename and reprint virtually its entire catalog (see Digger Pack 1 commentary for the “sister” product of this pack). It is not clear why the new name still has a 1 at the end of it, as there never was a Total East Front Pack 2. In terms of components, the only difference between the two editions is that the 2nd edition includes a large urban overlay–which, however, does not seem to be used in any of the included scenarios, so it is so much wasted paper.

The scenarios are basically the same as well. Some of the artwork is different and the SSRs have their language tightened up. The only changes to the OBs are very slight differences in leaders in some of the scenarios; nothing that would cause someone who owned the original pack to buy this new version.

Of the eight scenarios, four of them, all designed by Michael Licari, are small and tournament-sized. The other four, designed by diverse hands, tend towards the large. Three scenarios use OBA; one scenario uses Night rules. One scenario, OP8 (Olin’s Surprise), is an all-armor scenario.

In the years since its release, the pack hasn’t been played very much. The scenario that has received the most plays, and seems to be balanced, is OP2 (The Last Waltz). At $19.95, the pack is somewhat overpriced (amusingly, as of this writing, the original Total East Front Pack is still available on Critical Hit’s Web site for only $13.95). 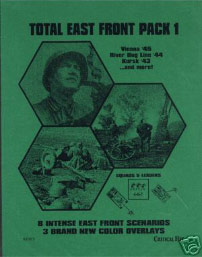