Trench of Death is an obscure ASL newsletter published by JP Dasseville; it only ever saw two issues.  It was published in Belgium, but as an English language publication, similar to ASL News.  That, and the participation of Belgian ASLers, was essentially the only way in which it was similar to ASL News, however, as it is crudely produced, apparently as a word processor document printed on a poor inkjet printer.  Few copies appear to have been printed of either issue.  A small newsletter, its content included AARs, articles photocopied from other newsletters, and tournament reports.

Each issue also contained scenarios; it is not clear if they were playtested.  Trench of Death #2 contained the following scenarios:

This newsletter is probably something that only a real completionist would want. 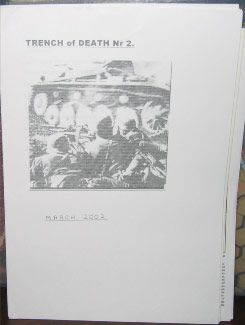