Uncommon Valor (UV) depicts the struggle between the Japanese and the U.S. Marine Corps for control of Motoyama Airfield #2 on Iwo Jima in February 1945.  It was the first of a planned three-part series of Iwo Jima modules, although the other two modules never materialized (although there is a prototype of one of the other modules in existence).

Uncommon Valor’s map (on which 6 of the 8 scenarios take place; the other 2 use geomorphic maps) is fairly unattractive, dominated by browns and grays.  However, it would probably be hard to make the ash-covered volcanic island of Iwo Jima very attractive.

Uncommon Valor came out at the same time as Critical Hit’s other late-war PTO module, Ordeal Before Shuri (depicting actions on Okinawa), and shares some of its characteristics, including the use of complicated rules (7 of UV’s 8 scenarios, for example, involve caves).  However, less care seems to have been put into creating the UV rules and charts than was taken with OBS.  One Platoon Leader campaign game is included, CG1 (Flesh Against Concrete), which, at 20 campaign dates, is fairly substantial.  It has received play from the few people who have dared it.

This is one of the lesser played historical modules, because of its subject matter and complexity.  Although it has some fans–mostly former Marines–it may not be to most people’s tastes.

2nd Edition (i.e., Iwo Jima: Motoyama Airfield #2) comments:  In 2013, Critical Hit released a second edition of Uncommon Valor (naturally, with a completely different name).   It may be that the long interval between editions had something to do with Uncommon Valor’s popularity, or lack thereof.  This did not have to do with quality so much as the nature of the combat on Iwo itself.  Uncommon Valor did have a tiny but dedicated audience, though, often consisting of former Marines.  Not that many people are interested in cave-filled slugfests, it seems.  In all likelihood, the decision to release a new version was spurred by MMP’s own release of Rising Sun, the new PTO core module.

The new version, Iwo Jima:  Motoyama Airfield #2 (a far poorer name than the original had), does contain a number of differences from the original, the most noteworthy of which is a new map.  Or set of maps.  Unlike the original, which contained a single historical map, IJMA#2 uses 4 smaller maps to portray the same terrain.  This new map style, which debuted in a number of Critical Hit reprints in 2013, discards the old folded matte heavy paper maps in favor of smaller (12″ x 18″) unfolded glossy light cardstock maps.   This new map style is already becoming controversial.  Although it probably has a cost advantage for Critical Hit, the sole advantage to the player is that maps on this paper seem a bit brighter (which is a good thing).  There are several items on the down side, however.  First, the maps are unfolded, which means that this product comes in a huge shrinkwrap instead of a resealable ziplock baggie, so players will have to find some other way to store the product.  Also, unless they fold the maps themselves, they will find the product large and awkward to store.  They also have to arrange four different maps (which have both overlaying and nonoverlaying elements) instead of unfolding a single map.  The glossy nature of the maps causes glare when lights are shined on them.

But worst of all is that these maps are not cut.  Rather, a thin white border surrounds each and every map in this product, which means that the consumer must use scissors, a razor, or a paper cutter to cut off all of the white strips (16 in all) so that the maps can actually be used, just as if they were big overlays.  In other words, this is not so much a wargame as a wargame kit in which players must finish assembling the item themselves.  To save a few pennies on cutting, Critical Hit made things much more difficult on their own customers.

This irritating fact is nowhere mentioned in the marketing copy for this game.  However, in typical (slimy) Critical Hit fashion, buried at the bottom of the last scenario card, in tiny type, is this little note:  “A slight white edge is left on the printed boards so that players can trim to their choice of overlap in the same manner as standard overlays.”  In other words, Critical Hit tries to present what is clearly a huge drawback on the maps done for cost-cutting reasons as a “feature.”  Well, it is not a feature.  It is a bug and a large one at that.

The map artwork is in general much better than that of the original, which was dark and gloomy and not something people would have a hankering to play on.  The new artwork is brighter, but also more clear and distinct.  The terrain seems basically the same as in the original, except for one of the runways, which now has a swervy border instead of a straight border.  It seems obvious that this was done to make clearer what is and what is not a runway hex, but I think the rules could have provided the same clarification without making that runway look so odd visually.  The 4 maps line up flush on one side but overlap on the other.  The hexes are fairly large.

The rules for IJMA#2 are not very extensive; essentially there are only three pages of non-campaign game rules and none are complex.  In 2013, Critical Hit began printing its rules in color (a good thing) and in loose-leaf three-hole-punched pages (probably a good thing).  They are certainly more attractive than older styles.

The IJMA#2 campaign game, dubbed Uncommon Valor, ostensibly takes place in a very little covered era for Iwo Jima:  the day of May 13, 1940.  This will surprise those ASLers who thought the battle for Iwo Jima took place in February-March 1945.  Of course, the rules also say it has only 4 campaign dates, when the accompanying charts (and the original Uncommon Valor) clearly show that it has 20 campaign dates that range from February 25 through March 3.  Just another example of sloppy Critical Hit quality control.

The eight scenarios are the same as in the original Uncommon Valor (even to the extent of repeating the typo in the title of UV4 ( Into the Breech (sic) Once More).  The only changes seem to be cosmetic changes such as re-wording some of the SSRs to standardize them.  In all likelihood, the original scenarios never saw enough playings for anybody to determine if balance errata was warranted.  As in the original, two of the scenarios do not use the historical map but rather some of the desert geomorphic mapboards.

IJMA#2 also comes with a small number of counters.  One countersheet is simply USMC infantry MMC/SMC and contains no original counters, only duplicates.  That is mostly the case with the little 5/8″ countersheet as well, though there are a couple of counters for dug-in Japanese tanks.

If one can get past the inherent drawbacks of the fighting (caves, heavy fortifications, etc.), and the irritating maps that you have to cut out, IJMA#2 is worth a look.  The artwork is much better and it does offer a very meaty campaign game. 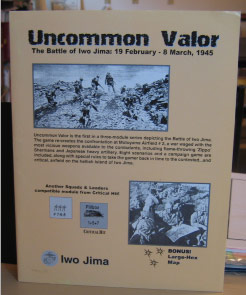