Apparently in anticipation of the re-printing of Code of Bushido and Gung Ho in the form of Rising Sun, in the summer of 2013, Battleschool began a new series of dice dubbed the “Pacific Series,” one of the first of which was a pair of USMC-themed dice.

This set consists of two 5/8″ (16mm) custom precision dice.  One is white and where the 1-pip would normally be is instead a silhouette that slightly resembles the flag-raising on Iwo Jima.

The other die is amber in color and in lieu of the 1-pip features a red USMC logo.  Unfortunately, at a number of angles the red foil is extremely hard to read against the amber die, so what would have been a very attractive pair of dice consequently loses a little bit of its luster.

Despite the problems with the amber die, ASL fans of the USMC may still be tempted to get this. 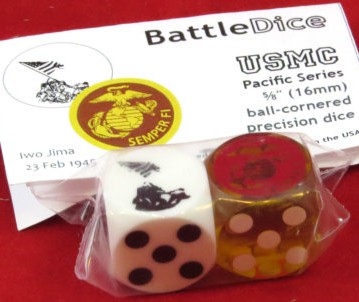