2nd Edition: 2 22" x 34" Historical maps (one from the first edition and one from the Dzerhezinsky Tractor Works module), 1 play aid with large hex images of several buildings (that might be particularly congested), 9 scenarios, 1 campaign game (kind of).

Valor of the 37th Guards is one of the most disappointing products Critical Hit has produced.  Ostensibly, it is a historical module depicting the German 305th Infantry Division’s attack (with supporting elements) on the Dzerhezinsky Tractor Factory, defended by the 37th Guards Rifle Division, in October 1942.  The map is actually the same artwork used in Critical Hit’s previous module, The Dzerhezinsky Tractor Works (DTW), except that the hexes are larger and the map area somewhat smaller.  Ownership of Red Barricades is required to play.

Because many ASLers were disappointed by the small-hex size in DTW, it is probable that many of them might have been willing to purchase a large-hex version of the map.  However, Critical Hit did not simply release a large-hex version of the map; rather it bundled the map with a few very shoddy looking “scenarios” and a “campaign game” that seemed more like an excuse to jack up the price and help it find a place on the shelf in retail outlets than anything else.  The nine scenarios are, first of all, generic.  There is no indication that any of these actions actually took place.  Secondly, the scenarios themselves are in a horrible format.  Ostensibly, each side will have its own scenario card for a particular scenario, which depicts its own forces, assigns a victory condition, gives a rational for the fight (“The Communists are forming up for another fruitless attack.  We must stop them before they re-take any important terrain…”), and provides special rules.  This apparently was a muddled attempt to provide “fog of war,” since one’s opponent’s order of battle and victory conditions will not appear on one’s own card.  Of course, anybody purchasing the module will have access to all scenario cards.  It was a bad idea, equally poorly realized.  Some players used scissors and photocopiers to put together their own versions of the scenarios, while others did the same using desktop publishing programs.

Perhaps the most laughable aspect of the module is the so-called “campaign game,” which consists of essentially four rules.  These rules tell players to use the Red Barricades campaign game rules with a couple of minor modifications.  There was not even an attempt to include a Platoon Leader Campaign Game.  It is difficult to come away from this product without getting the feeling that there was no playtesting (unlike DTW, no playtesters are listed) or, really, any particular effort put into it.  It seems more like the definition of a shoddy ASL product.  The only reason to get this module is if a large-hex map of the Tractor Works is really desired (the 2nd Edition may be marginally better).

2nd Edition Comments:  In 2005, Critical Hit released a 2nd Edition of Valor of the 37th Guards.  It contained the map that appeared in the first edition, as well as a gratuitous copy of the small-hex version of the map that appeared in The Dzerhezinsky Tractor Works (presumably because there were a lot of extra copies lying around; it is included “for use in tracing LOS”).   The 2nd Edition was sold in a Full and Upgrade versions, the only difference being that the Upgrade versions did not contain the Valor of the 37th Guards map (although they did contain the older DTW map).  The scenarios do not use the awful format of the first edition.  Ostensibly they are “all new,” but in fact they are all simply variants of the original scenarios, with some differences in the orders of battle. 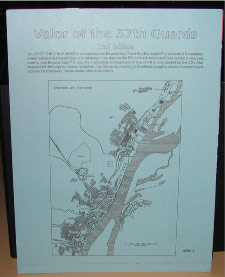