Home > Products > View from the Trenches

Publisher/Date:
View from the Trenches (1995 - present)

Its first issue was only 4 pages long, but it would be the start of a long and satisfying run for View from the Trenches (VftT), one of the longest-running and best ASL newsletters.  VftT grew in size and grew in quality to become a fine newsletter, one that has represented Great Britain well for over a decade.  It has also attracted an audience that has reached beyond Great Britain to at least five continents.

VftT was designed first of all to serve the British ASL scene and much of its content reflects that desire.  Typically 20 pages long (or twice that for its double issues), it contains an “Incoming” section, to alert British ASLdom to new and coming products, as well as a variety of tournament announcements and reports, and a British players list.  It has also featured scenario analyses, AARs, strategy articles, strategy and tactics articles, reviews, designers notes, historical material, reference notes, and more.  All issues of View from the Trenches are available as freely downloadable PDF files.

In its latter years, VffT established a thrice-yearly schedule.  The amount and quality of its article content fell off during this time, perhaps due to competition from on-line ASL forums.

Between issues 32 and 42, there were 22 scenarios published in View from the Trenches (this includes the 6 Jim McLeod-designed Maple Leaf Route scenarios later published in the Canada at War pack and again in 2012 as part of the Elite Canadians pack).  Although they have been freely available (from the above source), they have for some reason not seen that much play.

The scenarios (typically done with VASL graphics that seem somewhat dated today) include:

Issue #88 (May-August 2013) includes a Platoon Leader Campaign Game, PL CG VFTT B (Tangled at Tsangkou), which apparently was submitted by Steve Swann a million years earlier, but thrown in a drawer.  It takes place in November 1945 in Tsangkou, China, after the end of the war and, rare in the annals of ASL, features the Nationalist and Communist Chinese as the combatants.  It is not clear to what extent, if any, it has been playtested. 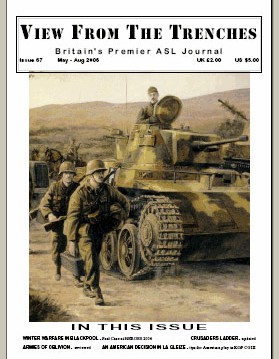