Second Edition (2018) is Wacht Am Rhein: Hitlers' Last Gamble in the West, Volume 1.

Wacht Am Rhein:  Hitler’s Last Gamble in the West (WaR), is a double-sized scenario pack from Lone Canuck featuring scenarios set during the Battle of the Bulge.   This pack was originally planned as “Winpack #2,” but was retitled, apparently to make it clear that it was a themed scenario pack.  It was the first Lone Canuck release to feature U.S. troops.

The scenarios in WaR overwhelmingly tend towards the large; 13 of its 16 scenarios are large actions.  Most of the scenarios in the opening period of the battle, with the result that the vast majority of actions feature Germans as attackers.  However, as the scenarios take place on the southern flank, there are far fewer elite German units than one might normally see.  However, George Kelln is very ungenerous to the Americans, and even battle-tested veteran units are represented by a mix of 6-6-6 and 5-4-6 squads.

Five scenarios have OBA (typically 155mm OBA); one scenario has air support.  There are no Night scenarios.  The most played scenarios from this pack tend to be poorly balanced, so this may not be one of Lone Canuck’s better efforts.  However, a couple may be worth trying, including WAR5 (Here We Stand) and WAR13 (Aus der Traum).

Second Edition Comments:  In 2018, Lone Canuck released a second edition of WaR.  Dubbed “Volume 1,” it included only half the number of scenarios that the first edition did, implying that the other scenarios will appear in a follow-on product later.  The 2nd Edition also included a half-sheet of die-cut counters (140 total).

The half-countersheet reflects a further development in the ability of Lone Canuck’s production capabilities.  Once able only to produce scenario cards, after many years it expanded to produce historical maps and, in 2017, expanded its abilities still further to produce countersheets. The counters are die-cut and appear to be professionally printed. They seem of good quality, which is not always something that can be said of third party counters.

Of the counters, 120 of the 140 counters are German counters. The 20 American counters consist solely of 6-6-7 “assault engineer” squads (and their 3-4-7 half-squads), “Bangalore Torpedo” counters, and 5 Armor Leaders.

The German counters, too, are mostly counters not new to the system. They include 30 leaders, armor leaders, and heroes; 4 “Forward Observer” counters; 6 “Bangalore Torpedo” counters, 20 8-3-8/3-3-8 “Assault Engineer” squads and half-squads; 20 4-4-7/2-3-7 squads and half-squads; and 20 5-4-8/2-3-8 squads and half-squads.  However, 20 of the counters reflect a new squad type, a 5-4-7 squad with assault and spraying fire intended to represent Volksgrenadier squads.  Several ASL designers have lamented the lack of such squads (though Desperation Morale has not) and Lone Canuck apparently decided to take the matter into its own hands. Some ASLers will be pleased with this, although it should be noted that the countersheet does not provide a full set of such squads; there are only 10 squads and 10 half-squads. This may disappoint some ASLers wishing to use them for DYO or even third party scenarios. For what it may be worth, the VG squads (and also various SMC designated as VG) have counter artwork depicting them as having winter camouflage.

The 8 included scenarios are new versions of the first 8 scenarios of the original edition. However, the scenarios are so substantially changed that they should be considered new scenarios–and one hopes that the new versions were playtested all over again (there are some playtesters listed).  Most scenarios have changes in balance, boards, turn length, ELR/SAN, SSRs, and OBs.

This is the second time Lone Canuck has issued a new edition of a product with such drastic changes (the first was Combat History of Schwere Panzerjäger Abteilung 653); it is not really clear why. 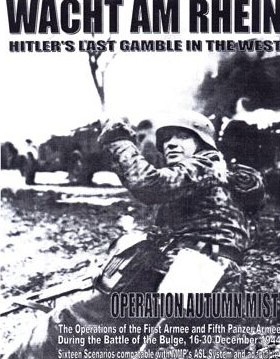