Wake: Pacific Alamo (hereinafter just Wake) is Critical Hit’s new historical module on the Japanese invasion of American-held Wake Island in December 1941. For some reason, the product is described on Critical Hit’s website as being titled “Wake: Gallant Stand.”   The title “Pacific Alamo”–which is taken from a book on the invasion–was some time ago chosen as a title for a Wake module by Heat of Battle that never saw print. Apparently Critical Hit liked the book title better than its own original title.

This battle is significant for a number of reasons.  First, the module is a rare portrayal of a Japanese amphibious operation; second, the module is a relatively rare very early war look at the Americans; and third, the Battle of Wake Island itself is also an extremely rare example of a defeated amphibious operation.  The first Japanese attempt to conquer Wake Island was actually defeated by the Americans–but the Japanese regrouped, tried again, and succeeded the second time around.

No specific credit is given for the design of this module, but it seems to have been something cobbled together by Ray Tapio from partial or unfinished earlier submissions of material on Wake Island by Dan Dolan, Larry Winslow and “others.” The map seems to be derived from a Wake map drawn up by Dan Dolan from a module he designed a number of years ago, which he called “Wake: The Death of Pride.”  It had 8 scenarios and a campaign game (the latter of which this module does not).  In 2013, Dolan said that he stopped work on his Wake project “several years ago when Ray wanted it to be an ATS product.  It needs further testing and an artist to do the map better than I.”

Wake does seem rather cobbled together, especially in that there are relatively few rules included to simulate what was a complex battle.  The rules booklet is 6-pages long, but only about 4 to 4 1/2 of those pages really consist of rules.  The rest consists of footnotes, a historical summary and the like.  The historical summary was directly plagiarized from Wikipedia.  No playtesters at all are listed, which is usually a bad sign for Critical Hit products.

What is typically called “Wake Island” was actually an atoll consisting of larger island, Wake, and two small islands:  Peale and Wilkes.  The module Wake depicts Wilkes Island and part of Wake Island, but leaves off the rest of Wake Island as well as all of Peale Island.  Thus one does not get the entire battle area in this module, only part of it.  Nevertheless, the map area is a very large extended rectangle with a lot of map area.

The map is formed by combining the 9 different map panels included with the module to construct the actual map.  The map panels are printed on light glossy cardstock.  While bright and colorful, they have the distinct disadvantage of having to be assembled in order to be played on.  Experience has shown that assembling more than 4 such map panels becomes a pain in the neck.  The artwork on the map panels is merely adequate.  No outside artist was used, it seems, and the graphic quality is equivalent to that used for Critical Hit’s recent geoboards.  The unrealistic way the runways were depicted is particularly irritating.

Most of the rules simply describe the terrain types on the Wake maps.  There are also a few miscellaneous rules, such as the ridiculous “USMC Courage” rule, which decrees that any American unit manning a weapon is fanatic.  More relevant are rules for “On Board Naval Direct Fire,” which is conducted by Japanese destroyers. Such destroyers are basically stationary gun platforms for the Japanese, as destroyer counters are placed in specific hexes and cannot move during play.

As is typical with latter-day Critical Hit products, there are also simplified Night Rules.

The American countersheet also includes two new squad types:  4-2-7s and 3-2-6s (though only 2 of the former and 12 of the latter).  One would have presumed that these were intended to represent the naval personnel and civilian workers who were given weapons and “re-purposed” into makeshift infantry.  That is how they seem to be used in the only scenario in which they appear, the so-called “monster” scenario, Wake9 (Pacific Alamo).  However, these units are never mentioned or explained in the rules, so they are something of a mystery.  Are they inexperienced troops?  Are they treated as USMC?  They have underlined morale so that they do not go down in quality when they ELR.

Wake comes with one full countersheet and two half-sheets.  The full sheet is a Japanese countersheet that contains the units mentioned above as well as duplicates of various SW, leaders, tank hunter heroes, and the like.  One half-sheet has American 1/2″ counters, which consist of the above mentioned counters, plus 4-5-8s, crews, SW and leaders, including 10 so-called “ordnance leaders.”

The second half-sheet is a 5/8″ countersheet that includes American artillery pieces and AA guns, a few trucks and jeeps, American and Japanese fighter bombers, Japanese warships, and, for some reason, aircraft bomb counters.

The whole battle for Wake lasted several weeks, including air attacks and bombardments, as well as two different landing attempts (the first was called off before landing because of the Japanese ships sunk).  The module Wake tries, kind of, to provide this sort of feel.  Of the 9 scenarios included, the first 2 are designed primarily as “preliminary scenarios” to be played in advance of the “monster scenario.”  Some things that happen in those scenarios “carry over” to the monster scenario. The monster scenario, Wake9 (Pacific Alamo) has an “American Staying Power” value that, if the Americans exceed in a DR, will cause the Americans to surrender.  The value is modified by various things, mostly casualties.  The whole thing seems a bit muddled.

As mentioned, Wake comes with only 9 scenarios, not all of which are truly playable (in a play value rather than technical sense).  Wake1 (Nell Hell), for example, is a 4.5 turn scenario set on the entire huge Wake map that depicts a stylized Japanese air attack on the atoll.  The Americans win if they get 8 damage points on the Japanese “bomber support counters.”  But as a standalone scenario, the Japanese have no impetus to even get near the island.  Only if played with scenario 9 does this scenario make any sense, in that at least in that case, bombing results and casualties will carry over into the monster scenario when played.

Similarly, Wake2 (Danger on Wake’s Doostep) is a stylized representation of the first attempt to assault Wake Island.  The Americans get 4 guns and 4 planes.  The Japanese have a fleet of warships.  For 3.5 turns, the Americans just shoot at the warships.  What does the Japanese player do?  Virtually nothing.  If an American gun gets a hit on a Japanese ship–and only if there’s a hit–the Japanese “naval asset” can make a DR.  On a 2 or 3 something happens, though only on a 2 does something of consequence happen.  It is hard to imagine a more boring scenario, even as a preliminary.

Scenarios Wake3 through Wake8 are “real” scenarios.  Five of the six use the simplified Night rules provided in the Wake rules pages.  Wake3 (First Landing) and Wake5 (“Enemy Apparently Landing”) are basically Seaborne Assaults, though the scenario cards do not describe them as such.  The Japanese forces set up practically on top of the beach, so they will get on land quickly.  In Wake3, the Americans get 2 squads, 8 half squads, and 4 guns, while the Japanese get 12.5 squads and 4 crews, with assorted toys.  All the Japanese debark from a single ship.  Wake5 is very similar in nature.  In the non-landing scenarios, the American OBs still tend to be mostly represented by half-squads and crews.  The scenarios all tend to be very small.

Incidentally, the historical descriptions on the scenario cards seem to be taken verbatim from a USMC historical booklet on the battle for Wake; Critical Hit could not even be bothered to write its own scenario historical summaries.

Wake9 (Pacific Alamo) is the “monster” scenario, but as monster scenarios go, it is not particularly huge. The Americans have a grand total of 29 squad equivalents and 20 crews (for 20 guns).  The Japanese player gets 42 randomly determined squads and 23 crews (plus an amazing 39 SW), as well as OBA and Air Support.  Needless to say, it is an amphibious landing, though craft start virtually on-shore.

To win, the Japanese must accomplish at least 4 of the following objectives: 1) getting the big American guns, 2) getting building hexes, 3) clearing Americans from around the runway, 4) exiting units off the northeast edge, 5) getting 24 more CVP than the Americans, and 6) cut the American phone security system.  They must accomplish these objectives by game end.  The scenario ends after 42 turns.  They also win immediately if the American surrender (see above). The monster scenario has only 6 SSRs, one of which is optional, which is a very small number for either a monster scenario or an amphibious landing.

The whole product has the feel of something hastily put together (such as the scenario card OB reference to “Admiral” Cunningham, actually a mere commander).  Indeed, not long after Wake’s release, Critical Hit had to e-mail to everyone who bought the product directly from them a “Wake Q&A” document answering questions that players were asking, particularly about the Searchlight rules, and providing clarifications and errata.  They also sent out a Version 1.1 of the Wake rules pages, though there do not seem to be many changes in it.

What one really looks for in an ASL historical module is a module lovingly crafted, in which the designer lavishes as least as much attention and care on the product as you will lavish upon it as you learn and play it.  Wake, unfortunately, does not seem to be such a module. 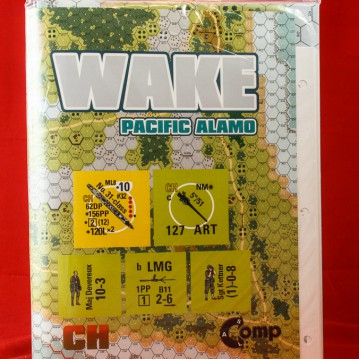