Westerplatte is an ASL historical module dealing with one of the first actions of World War II:  the fighting between German and Polish forces on the Westerplatte peninsula at Danzig (Gdansk) in early September 1939.  Although a “new” product, Westerplatte is at the same time a retread, as its history dates back close to 20 years.  In 1998, Morten Lundsteen, a Danish ASLer, announced on Usenet that “I have made a historical module for ASL, please let me know what you think!”  Lundsteen had created Westerplatte and placed downloadable maps and rules on his website.  As such, it was one of the earliest online-only ASL projects.

It did not stay available long.  Ray Tapio of Critical Hit, always on the lookout to score ASL-related product, purchased Westerplatte from Lundsteen, who removed it from his website, announcing that it would be published by Critical Hit in 1999.  That was 16 long years ago, long enough for Westerplatte to have become a lost and forgotten ASL product.  It is not even clear if Lundsteen himself is still active on the ASL scene.

There are 4 pages of hole-punched rules printed in color that detail the circumstances of Westerplatte.  They are not written with the desirable level of preciseness and clarity, unfortunately.

What quickly becomes obvious to the reader is that this is not a typical ASL historical module.  It is really only a linked-scenario campaign game on a historical map.  Unlike other historical modules, the scenarios in Westerplatte cannot be played independently, because scenarios 2-9 all build on their predecessors.  There is no way to play scenario 7 without having played scenarios 1-6 first.

Because of this fact, Westerplatte is only of value for ASLers who want to play the campaign game, which requires playing virtually all of the scenarios (9 or 10, depending).

There are not many special rules; most detail some simple terrain considerations.  However, there is a big chunk of rules dealing with the presence in counter form of the Schleswig-Holstein, an old World War I-era German battleship that in the 1930s was being used as a training vessel.  Or perhaps a miniaturized version of the Schleswig-Holstein, as the actual ship was about three hexes long in ASL terms, but appears as a standard 5/8″ counter.   Given the nature of the ship–which cannot move in the course of a scenario and cannot be hurt by the Polish player–there is really no need for these rules; the ship’s effects could have been abstracted.

The rest of the rules deal with linking between the scenarios.  The Poles start with basically their entire force on-board; it will get whittled down during the course of the 10 scenarios.  The Germans, on the other hand, don’t really have a force.  In fact, in most of the scenarios, the German forces are purchased.  Thus while the Poles find their strength disappearing during the course of the campaign, the Germans actually accrue a force over time.

Some of the scenarios leave a bit to be desired, especially #5 (Stuka Wave – The Second Day), a 2 1/2 turn scenario featuring 10 German Stukas against whatever the Poles have on the maps.  The Germans win if they kill 24 CVP worth of Polish forces.  In fact, the ground forces can only even move during the Advance Phase, per SSR.  Not Desperation Morale’s idea of a fun scenario.

One of the theoretical appeals of Westerplatte is fighting on a historical map.  The Westerplatte map comes in 6 12″ x 18″ unmounted heavy paper/light cardstock glossy map panels, which must be arranged to form the actual map area.  These maps, which appear to be the new standard for all of Critical Hit’s historical maps since 2014, are rather polarizing, with some ASL players absolutely hating them and others not minding them.  The one advantage that they clear have is that they are bright and colorful, allowing graphics to be more attractive than the muted graphics of earlier Critical Hit maps.  On the other hand, it is a pain in the neck to assemble the maps and they have glare because of their glossiness.

Leaving aside the nature of the map paper, the map graphics themselves are mediocre.  The terrain is not particular exciting, while the artwork is standard Ray Tapio, using the same style of graphics that he has used in recent geo-boards–which means that whenever buildings are aligned in any way other than a perfectly vertical or perfectly horizontal alignment, the building graphics are full of jaggies and look heavily pixelated.  This has been a serious graphics problem for some years, yet Critical Hit seems not to care about fixing it at all.  In addition, the paved roads are hard to see against the green background.

Westerplatte comes with a large number of die-cut counters, but almost none of them are needed–only a handful of Guardhouse counters and the Schleswig-Holstein.  The others are all duplicates of existing counters.  They are essentially there because Critical Hit has determined that people are more likely to buy a product if it has counters, regardless of whether or not it needs counters.  As a result, a purchaser gets scores of Polish AFVs, not a one of which can be used with Westerplatte.

Given that Westerplatte is priced at $99.95, but in effect contains a single linked-scenario campaign game and a meh map, it is hard to find a reason to recommend this product to anyone.  Your gaming dollars are better spent elsewhere. 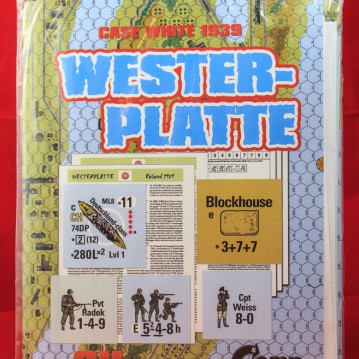