Winpack 2 is the first release in several years from the once-prolific (arguably, too prolific) hands of Canadian scenario designer George Kelln.  This small scenario pack features 6 tournament-sized scenarios of mixed theme–though the actions are all set between Americans and Germans in Europe (primarily France) in 1944.  There is one slight exception to this:  a 1942 American-Vichy French action (the scenario card mistakenly places it in 1943).

The scenarios are indeed small.  The largest of them is WP16 (A Thorn in the Flesh), which pits 12 Waffen SS squads and 4 AFVs against 7.5 American squads, two Bazooka-toting crews, and an AT gun.  The others are of comparable size or smaller, a couple of them even being too small for tournament play, such as WP13 (Bridge Number 10), which has only 3.5 American squads and 2 German squads and 2 crews.  No scenario in this pack will take more than a few hours to play and most will be finished quickly.  One scenario has OBA; no scenarios use Night or Air Support rules.  The SSRs are simple and straightforward.

One scenario, WP14 (Tooth and Nail), utilizes ASLSK board p.

The smallest scenarios may have limited appeal, but the larger scenarios in the pack might indeed be tournament-worthy, should they prove well-balanced.  To date, the most played (and balanced) scenario is WP15 (Burnt, Blue and Grey). 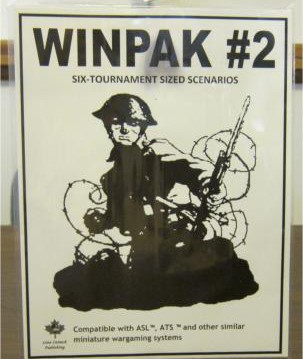