This early Kelln release contains a Canadian dozen’s worth of varied scenarios; Winpack #1 (WP1) is one of the few Lone Canuck scenario packs which is completely un-themed.  Actions range from Sicily/Italy 1943 to the Soviet Union 1943 to Germany 1939 (!) to Germany 1945 to France 1944 to Burma 1942 (a rare PTO scenario for Kelln).

The scenarios are much smaller than is typical for many Lone Canuck scenario packs.  WP1 has only two large scenarios and two medium-sized scenarios; the other six are all small (and typically suited for tournament play).  One of the scenarios, WP2 (Attack on the Partisan Headquarters) is unfortunately a generic scenario in which none of the units are even identified (other than as “partisans” and “rear area security battalion.”  In another scenario, WP8 (“That Damn Bridge”), the American unit is identified as the “13th U.S. Infantry Division,” but there was no 13th Infantry Division in the U.S. Army.

Half of the scenarios have OBA.  One scenario has air support.  There are no Night scenarios.  The scenario that has seen the most play is WP5 (The Last Assault), probably because it is tournament-sized and features King Tigers. 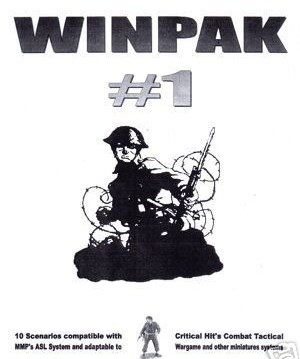