After a disappointing Bonus Pack in 2018–except for ASLers who love DASL–MMP returned to form in 2019, releasing its 10th “bonus pack” at the Winter Offensive tournament in January 2019. MMP’s “bonus packs” generally consist of 1-3 new geoboards and 2-4 new scenarios, making them mini-Action Packs.

Bonus Pack 10 is a bit of a departure in that the geo-boards are two unmounted “Gary-style” 11″ x 16″ geoboards (10a/b and 11a/b), rather than traditional 8″ x 22″ geoboards. Official “Gary-style” geoboards had previously appeared only in certain Action Packs (6, 8, and 9). As is typical with modern MMP geoboards, the artwork is crisp, colorful and attractive.

Board 10a/b is a nice addition, featuring a small village nestled among several hills that resembles the classic geoboard 3, but in a square configuration. It’s easy to imagine this board becoming a staple of scenario designers. It almost looks as if 10a/b is not a true geomorphic board, as it seems to bisect two building hexes, but the buildings are actually very narrow buildings that take up just half a hex each and one can just barely see the white dot on the far side of them, which of course allows the half-hex on any mating geoboard to be open ground.

Board 11a/b is a bit of a puzzler, with half of it seeming to be village outskirts terrain and the other half rural farmland. There are probably a few too many buildings on the board for it to be used as a true rural board, but I’m sure there are some on ASLFarmersOnly.com who will nevertheless be happy with it.

The four scenarios are included on three cards, but the first and third cards each have their other sides used for the front and back marketing graphics (which also means those cards are printed on a different paper stock).

WO29 (Pynda Avenged) is an infantry only Italo-Greek scenario set in 1940 that features a Greek attack onto board 10b.  With 14 squads on one side, 13 on the other, and no heavy weaponry or AFVs, it ought to play fast and would be a good introductory scenario.

WO30 (As Luck Would Have It) is another tournament-sized scenario that takes place in Normandy on D-Day. It depicts a German counterattack–with 11 squads and 4 AFVs–against 8 squads of British paratroopers supported by an AT gun. The VC are a little complicated but other than that it is straightforward.

WO31 (Ma Deuce Delivers) is another France 1944 scenario, this time featuring a German attack (with 14 very well-armed squads and 3 King Tigers) against 7 U.S. squads, two AA guns, and 4 reinforcing tank destroyers. The Germans must clear the Americans from a road.

WO32 (Corps Value) is a Korean War scenario, the first published by ASL for its Forgotten War module since that module’s release. As such, it requires the counters and rules from that module. The scenario depicts fighting in Seoul in September 1950–i.e., during the American advance following the Inchon landings–and pits 7 USMC squads and 6 AFVs (including a flame-throwing tank) against 13 North Korean squads of varying quality and two Guns. The North Koreans can also purchase various fortifications (including HIP Suicide Heroes). Each side gets VP for various things, but basically the U.S. player must kick North Korean butt to win.

All in all, it’s not a bad pack. The maps are nice.  Of the scenarios, the two French actions are likely to get far more play than the other two (one, because it is infantry-only and features less “popular” nationalities; the other, because it is a Korean War scenario). 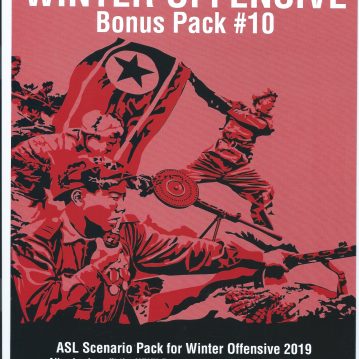