The year 2020 brought yet another Winter Offensive Bonus Pack from MMP.  These packs are always welcomed by ASLers not so much for their scenario content but for the fact that each one adds one or more new geoboards to the wonderful world of ASL cartography.

Winter Offensive Bonus Pack #11 adds one new geoboard, an 11″ x 16″ unmounted double-sided “gary-style” geoboard (13a/13b).  This is a dense city board with three particularly large multi-level buildings (one of 5 hexes, one of 7 hexes, and an unusually shaped one with 10 hexes).  The board also has several rows of rowhouse like building that are not, however, actually rowhouses.  For the religiously-inclined, two churches provide opportunities for reflection and worship (we are reliably informed that one is a Reformation Lutheran church and the other a Shi’ite mosque).

The city terrain is not completely level–the terrain of most cities is not–but includes three building-covered level-1 hills, as well as a tiny two-hex level-1 hill sans buildings.

A novel feature of board 13a/13b is the inclusion of “half-hex terrain features” up and down one of the board edges (hexrow GG). These include 5 building hexes in which all buildings end just shy of the center hex dot, as well as a woods/road hex in which the road curves through the half-hex but only touches the center hex dot. In other words, these hexes do not actually negate the geomorphic nature of the board, but they definitely make the edge hexrow different from most other such hexrows.

As is usual with MMP geoboards of this era, the artwork here is ABC:  attractive, bright, and crisp.

Bonus Pack #11 comes with three scenarios (WW33-WW35), one of which, as always, is printed on the back side of the product cover. Two are designed by Chas Argent, one by Ken Dunn.

WO33 (One-Eyed Jacques) is a France 1940 scenario centered on control of two of the big buildings mentioned above (control of one can give the Germans an immediate win; having more stuff than the French in or next to the other can give them a win at the end of the scenario).  The Germans get 14 squads, 3 leaders, and 6 AFVs.  The defending French get 11 squads and 3 guns, as well as 120mm OBA (that is required, however, to be Harassing Fire). The scenario looks interesting.

WO34 (Feast Day) takes place in Italy in late 1943, pitting Canadians against Germans in Ortona.  The attacking Canadians must control the Shi’ite mosque mentioned above, as well as various buildings. They have 10.5 elite squads and three Shermans.  The defending Germans get 8.5 squads–also elite. The German player may also place a shit-ton of rubble counters.

WO35 (Heroes’ Day) is a postwar scenario set on Java during early stages of the Indonesian war of independence. It features Indonesian troops pitted against Indian troops sent to Java to accept the Japanese surrender and maintain order (until the Dutch could retake control).  The Indonesians use Axis Minor counters, which is reasonable, considering they had been armed and trained by the Japanese; they also use Japanese SW (which may be recorded and kept offboard). There is also an unusual SSR designating 1-2-7 partisan half-squads as “Mobs.”  Mobs have Self-Rally, are immune to HOB (as well as Leader Creation and PAATC), may not recombine or form multi-location fire groups, are lax, don’t use SW well, and can initiate close combat during the movement phase. In the scenario, the Indonesian rebels (with 10 squads and 6 AFV) set up first, the Indians (with 16 squads and 4 better AFVs) set up second, and the (10) Mobs set up third.  The British, who move first, win by kicking Indonesia units out of the big funny-shaped building referred to above.  The scenario is a full 10 turns long, which makes it a bit of a slog.

For those interested in this conflict, there are additional scenarios available in the Scenario Designers Guide. 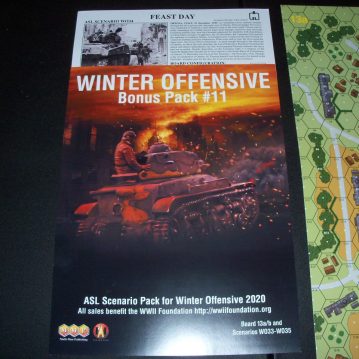