The pack contains one new geoboard and three scenarios, with (as per usual) one of the scenarios being printed on the reverse of the product’s (attractive) cover.

The geoboard, 14a, is a 10″ by 16″ geoboard that is dominated by largish grainfields, with an odd, largish x-shaped woods mass taking up the center of the map (a stream paralleling one of the axes of the x).  A cluster of buildings to the side constitute a tiny crossroads hamlet.  It’s mostly YAPB (yet another pastoral board) but is unobjectionable if unexciting.  Two of the scenarios take place solely on this board, while the third also requires board 11b.

There’s no reason not to purchase this, since it contains an official geoboard, and the scenarios generally look interesting. 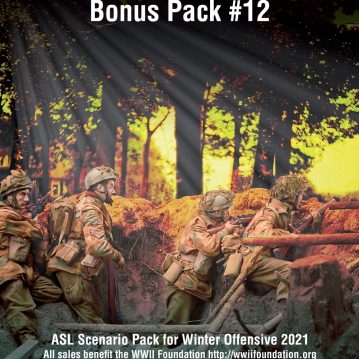