The Winter Offensive Bonus Pack #2 (BP2) is a tiny scenario pack that contains just three scenarios and a single new geomorphic mapboard.  It is the third mini-pack released by MMP since 2009.  Like its immediate predecessor, this pack was released at the annual Winter Offensive ASL tournament, a large ASL tournament organized by MMP.  MMP has said that 60% of the sales of this pack will be donated to the Richard Winters Leadership Project, which will put up a statue of Winters in Normandy (the beneficiary of the previous Bonus Pack was the ALS Foundation, to fight Lou Gehrig’s Disease, which probably would have been a better cause this year, too).

The new board that comes with the mini-pack, Board 63, is not a particularly exciting one. It is mostly open ground, with a small stone-building hamlet near the center.  A couple of large fields flank it on one side; a couple of small hills flank it on the other.   It’s somewhat useful for designers as a new village board.

Three scenarios come with the map, all on standard subjects (2 on Operation Market Garden and 1 on Normandy).  One of the scenarios is printed on the back of the front cover of the pack and thus is on a different type of paper.    WO3 (Counterattack at Carentan) is a small scenario pitting 9 Waffen SS squads and 4 AFVs against 6 U.S. paratrooper squads and an AT gun.  It’s not particularly remarkable.  WO4 (I Don’t Like Retreating Much) is somewhat larger, mostly because of its AFV content.  It pits 13 German squads and 8 AFVs against 9 US paratrooper squads and 6 British AFVs.  An SSR turns hedges into irrigation ditches.

The largest scenario is WO5 (Astride Hell’s Highway), which is also the most interesting of the three.  It features a small force of American paratroopers, later reinforced by considerable infantry and AFV reinforcements, defending a hamlet against a concerted German attack (19 squads of various qualities, assisted by 3 AFVs and 3 88mm guns, plus a small reinforcement later).  The scenario is 7 turns long, but the Germans can win at the end of Game Turn 5 if they can control two key buildings.  Failing that, they have a different set of goals; they can still win at scenario end if they can place enough FP on a key road (“Hell’s Highway”).  The Allies must stop them.

All three scenarios use Board 63; two of them also use another latter-day board, Board 54.

Bonus Pack #2 is what it is.  It’s got a new official board, which is the main reason people will purchase it.  The scenarios are basically gravy; one of them seems interesting.  It’s so inexpensive, though, that there’s little reason not to get it. 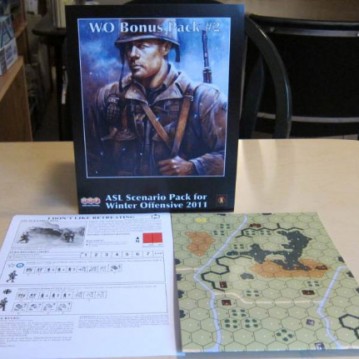