The Winter Offensive Bonus Pack #4 (WO4) is the fourth of a series of mini-packs released at the Winter Offensive ASL tournament hosted annually by MMP in Bowie, Maryland, each January.  These mini-packs typically consist of one or two new geomorphic mapboards and 2-3 scenarios.  In previous Bonus Packs, one of the scenarios was printed on the back of the front cover sheet, but thankfully that is not the case here.

With such products, the boards are usually the item of most interest, as they are the only additions to the “core” materials that ASLers need to accumulate.  The included board, Board 66, is not particularly remarkable (though not bad, either).  It is basically a rural board, with a bunch of hedges, a few fields, and some orchard-lined roads.  The R-GG half of the board, with a stream, a busy little hill, and a tiny crossroads hamlet, is a bit more interesting than the other half.  All three included scenarios use this board.

The first scenario, the unfortunately named WO9 (Sting ‘Em at Zingem) depicts a quite small, tournament sized Belgian-German 1940 action.  It is nice to see Belgians involved, though as noted elsewhere on this site, scenario designers rarely seem to be able to design a scenario in which the Chasseurs Ardennais are not mentioned, and this scenario is no exception.  One hopes that the scenario itself is less sloppy than the scenario card, which is rife with errors.  These include the misspelling of the aforementioned Chasseurs, the omission of the Belgian nationality symbol, and, most egregiously, getting the country where the action takes place wrong!  The scenario card states that the action takes place in “Zingem, Holland,” when in fact it takes about two seconds to ascertain that Zingem is actually in Belgium.  And, of course, it makes sense that Belgian units would be fighting in Belgium.  How this mistake could have been made is hard to figure out, especially since the scenario’s situation and aftermath text so clearly mention prominent Belgian geographical features.

The second scenario, WO10 (All Along the Merderet), is a somewhat larger scenario (both in forces and mapboards) pitting American paratroopers against German defenders on D-Day.  It has two “twists.”  The first is that almost the entire German order of battle (indeed, all of it except, for some reason, a lone AFV), is created by purchase.  At first, it looks as if the Germans have a great range of options with which to construct their force, but the SSRs in fact give them a total of only 6 purchase points and they may select no more than one purchase group from each of four categories (MMC, Leaders, Vehicles/Guns, and Special/SW).  Options range in cost from 1 purchase point to 3 purchase points, but the allowed total of only 6 purchase points means that there are few plausible combinations.

The second “twist” is that this is the scenario that uses the included half-board overlay (Overlay 7).  Indeed, it is quite possibly the only scenario that will ever use this overlay, which is a very specific overlay designed to represent the semi-famous La Fiere causeway (later renamed the Marcus Heim Way; scenario 13 [Le Manoir] from Paratrooper also takes place in that area).  Thus the overlay depicts a thin “path” traversing two huge marsh/depression areas, which makes it a relatively unique geographic feature that other scenarios are unlikely to need.  Interested ASL players can compare the geomorphic map depiction of this bit of Normandy with its historical map depiction in the Critical Hit historical module Kellam’s Bridge II.  The latter is more accurate.  It should be noted that the scenario also requires ASLSK board p.

The third scenario is WO11 (Across the Issel), is a very small scenario, pitting a British force of 7 1/2 squads, 2 Shermans and 5 Kangaroos against a German force of 6 squads and a halftrack mounting a 75L gun.  The Kangaroos are recalled no later than turn 2, so this really is a quite small action (and might be a bit too small, and therefore dicey, for tournament play, especially with a German SAN of 4). 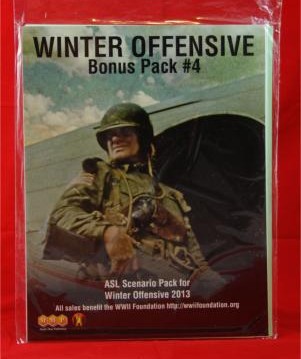