As expected, MMP released a new “bonus pack” at its Winter Offensive tournament in January 2017, Bonus Pack #8, containing one new geoboard and three scenarios.  Because they are a significant source of new geoboards, most ASLers purchase these items.

The single geoboard in Pack #8 is board 76, a city or village board, dominated by one- to two-hex stone buildings, with a few wooden buildings thrown in.  On one far end of the board the urban terrain continues on a Level 1 hill; on the opposite end of the board, an orchard-lined stream (?) ends the urbanity and beyond it are fields and small hill-lets.  It is an okay board but nothing special or new.  The artwork is, as usual, attractive.

Bonus Pack #8 comes with three scenarios, one of them, as always, irritatingly printed on the back of the product cover.  The three scenarios are all designed by Ken Dunn and are all rather large in size, making them not very suitable for tournament play.

WO21 (Bolder than Before) is an East Front scenario set near Lvov in June 23, 1941, on the second day of the invasion, but it is an atypical action, depicting a Soviet fight with motorcycle infantry against OUN (Ukrainian nationalist) partisans. The OUN goal, historically, was to liberate prisoners from a local prison and to attack whatever Soviets they could find.  The scenario establishes a complex set of victory conditions in which the OUN player secretly choose one of three possible set of victory conditions. The strange thing is that the VC are phrased in such a way that the Soviet player must attain them, so it seems that the Soviet player must figure out, through the course of play, exactly what his objective is, and then pursue it (or try to achieve all objectives).  Depending on the VC chosen, the scenario length can range from 5 1/2 to 7 1/2 turns in length.  Each VC option  also comes with additions to the OUN OB.

The OUN forces are ostensibly partisans but use Axis minor counters (4-4-7s and 3-3-6s; 17 squads total).  The initial Soviet OB consists of a small “NKVD Garrison” of 4 conscript squads, but on turns one and two, a force of 14 more squads, all on motorcycles, and three light tanks join them.

WO22 (The Cost of Non-Compliance) is another June 1941 East Front scenario.  It features a multi-step sequential setup (not simultaneous, as the scenario card says), but the Soviets are the attackers.  They have 14 4-4-7 squads and 12 AFVs, ranging from tin cans to KVs. They must control more stone buildings than the Germans and have more mobile functioning AFVs than the Germans.  The German force consists of 8 squads, 2 light tanks, and 3 guns, with 4 more tanks arriving as reinforcements.

For a change of pace, WO23 (A Simple Solution) is a US-German fracas set in Aachen in 1944. In this action, 20 US squads with flamethrowers and DCs must attack 17 German squads (4-4-7s and 4-3-6s), seeking to control various buildings on certain hexrows. The German player gets to choose from 5 options to improve his OB and/or to affect the VC.

You’ll buy it for the board, but if you like one or more of the scenarios, that’s gravy, basically. 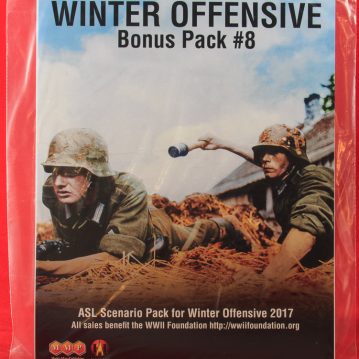