The Winter Offensive Bonus Pack (WOBP) is a tiny scenario pack that contains just two scenarios and a single new geomorphic mapboard.  It comes on the heels of a similar mini-pack for ASLSK that debuted in 2009.  This pack, however, was released at the January 2010 Winter Offensive ASL tournament, a large ASL tournament organized by MMP.  The Winter Offensive tournament also raised money to help fight the horrific disease ALS (often known as “Lou Gehrig’s Disease”).  In that spirit, MMP decided to donate $2 out of every copy sold (at $8) to the ALS Foundation.  (2014 note:  MMP later switched to a different cause, one commemorating D-Day)

Initially, MMP printed only a limited print run of 1,000 copies, which is far fewer than the typical ASL product sells (although they said they had printed a greater number of the maps, which they would later sell individually to people who wanted to keep their system complete but did not have an opportunity to purchase the WOBP).  However, within weeks they changed their minds and did another print run of WOBP (of an unknown amount), announcing that they would continue to donate $2 from each sale to the ALS Foundation.  Briefly, then, this was an ASL collector’s item.

Desperation Morale is not a fan of such mini-packs overall, but this may be a mild exception, insofar as it has a charitable aim, which makes the relatively spare offering more palatable.  The price is cheap (although shipping adds to it), but one doesn’t get much, either.

The mini-pack includes one geomorphic map, Board 59, which is a mix of terrain.  In the middle of the board os a small hamlet, bisected by a stream that also bisects the board.  One one side of the hamlet are some orchards, a low hill, and some grainfields; on the other side are several orchards and grainfields.  It doesn’t add anything new to the ASL map collection, but it is not a bad map.  The graphics are crisp.  It is interesting to note, though, the differences in map artwork between this map and the boards in Doomed Battalions, 3rd Edition, which was released at the same time.  The latter has weird, squished-bug orchard symbols, while they are “normal” in WOBP.  The WOBP map also has thin outlines around its hills; these are not present in the Doomed Battalions maps.  So even the “new style” ASL mapboards will not have a consistent style, after all (though released at the same time, the DB maps were actually created earlier and by a different artist than the WOBP map).

The two scenarios are, irritatingly, printed on the back sides of the front and back matter of the product.  One of them, WO1 (French Toast and Bacon) is a tiny 1944 action that pits 4 German squads and 6 tanks against 8 U.S. half squads, a tank destroyer, and two AT guns.  The American player also has an “offboard howitzer,” which functions as if it were a Gun six hexes off the map edge.  The other scenario, WO2 (Failure to Communicate), looks more interesting.  It is a 1940 French-German action that features a German attack with 14 squads and 5 tanks against defenders consisting of 10 squads, 4 AFVs, and 2 guns.

Most hard core ASLers will probably purchase this product no matter what the scenarios are, simply in order to get the needed mapboards. 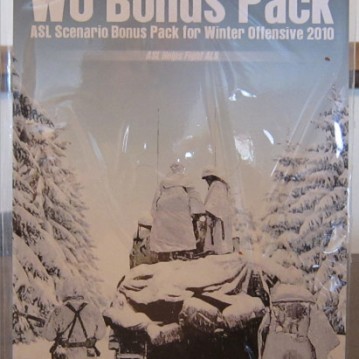