Critical Hit returns to the Red Devils at Arnhem with Witches (sic) Cauldron, an ASL port of their ATS release Oosterbeek Perimeter (designed by Kurt Martin; David Lamb did the conversion to ASL).  The main feature of the product is its very large and rather stunning historical map, which depicts the area west of Arnhem in which the bulk of the British 1st Airborne Division was trapped and virtually destroyed.  Though the colors are somewhat muted and drab (and the artwork is not as striking as that of the much older Arnhem: The Third Bridge, with which it does not mate), the map is nevertheless very impressive.  Even such details as soccer fields and tennis courts are rendered.

There are few additional rules (2 1/2 pages) needed to play the scenarios in Witches Cauldron.  These rules delineate the British troops (who may suffer from severe ammunition shortage, but on the other hand get Gammon bombs) and the terrain (none of which is complicated).

Unfortunately, players may not be able to satiate their desire to play scenarios on the map as much as they might like to.  Though Witches Cauldron contains 16 scenarios, most of them are smallish and use only a fraction of the map.  There is no large scenario which utilizes all or most of the map, nor is there a campaign game provided.  As a result, much of the promise of the map is currently unfulfilled.

2nd Edition (i.e., Brave But Doomed) Commentary:  In 2012, only five years after it was first published, Critical Hit released a 2nd Edition of its Oosterbeek module, dubbed Brave But Doomed (BBD).  This is perhaps one of the few times in the history of Critical Hit’s heavily-criticized practice of renaming new editions of previously printed products when a new name was acceptable, inasmuch as the original name contained a typographical error.  The new subtitle of the module, however–“The Battle of Arnhem”–is misleading, since none of the scenarios actually take place in Arnhem.  They all take place to the west of that city, in Oosterbeek (one reason why the original module had a subtitle referencing Oosterbeek).  Arnhem is not on the map.

The main feature is a new set of maps with an artwork style graphically different from the original, especially in its depiction of wood and of buildings.  More often than not, when Critical Hit has changed the map artwork of a product for a new edition, it has improved upon the original, but some people might not apply that generalization here.  The woods artwork (which also appeared in the geomorphic mapboard PTO1 with Digger Pack I and the building artwork both are dark and dense.  Moreover, somehow the new building artwork makes it more obvious that most of the buildings are clones of a few standard types, rather than individually-depicted buildings.  The woods also some contained cloned/stamped terrain; for example, the woods in hex NN7 are exactly the same as in PP7 and RR7; moreover, the fact that the woods are dark green and the hex numbers are black renders the hex numbers illegible in many hexes (they should have been white in those hexes).  In the previous edition, hex numbers were still legible in woods hexes (see pictures below).

While tastes vary, it is likely that many people would prefer the previous artwork to the graphics of the new version.  However, Critical Hit has also offered the maps alone for sale as an “upgrade set.”

The scenarios are the same as in the earlier version, though they are all marked “ver. 2.0,” meaning that some change, either errata, cosmetic, or otherwise occurs in them.  No additional larger scenarios were provided, meaning that players are still stuck with scenarios like BBD#1 (Tiger Route), which uses a map area of only 6 hexes by 7 hexes.

The original edition had no counters; BBD contains a countersheet; however, it is virtually entirely superfluous, consisting of extra British and Waffen SS units.  Three counters on the sheet, representing parachuted supplies, are the only new additions.

There is probably no reason for an owner of the first edition to need to buy BBD.  For non-owners, BBD might be appealing for Arnhem fans, as long as they are comfortable with small scenarios–which comprise the vast bulk of this product.

3rd Edition (Tiger Route) Comments:  Critical Hit’s business model is dependent upon renaming, recycling and re-releasing its entire catalog, so it was inevitable that this product would be renamed and recycled again.  This time the product is called Tiger Route.  The main difference from the previous edition is that the mapsheets are gone.  In their place are 9 12″ x 18″ heavy paper glossy map panels that must be painstakingly assembled to form the map area.  Experience has shown that trying to set up more than four such panels is a pain.  This module has more than twice as many, but one of the product’s drawbacks–its reliance on tiny scenarios–actually means that usually only a few map panels will be needed.  This is really important, as otherwise, the size of the map is larger than many gaming tables.

The artwork on the new maps is an odd mix of old and new.  The buildings and marshes of the 2nd edition are still here, but the woods of the 2nd edition have been replaced with more “traditional” woods artwork.  The new map is probably not any better or worse than the previous iteration, all things considered, though it is too large.

The price of Tiger Route is a rather hefty $69.95, heftier still when one considers that the scenarios are rather disappointing. 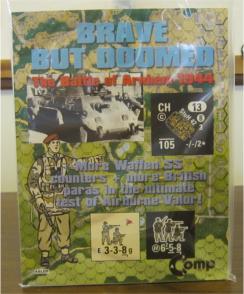