Did you ever have a friend who was “shortcut” obsessed?  Someone who never wanted to get on the highway and drive the direct way to a destination, but always had some devious shortcut that ostensibly would get someone to their destination faster and easier?  “I swear, I swear, this is much better!”  Some “shortcuts” can be so complicated that, frankly, maybe driving the “long” way is, in the end, easier on the mind.

Some ASLers may end up feeling this way about the “Wound Severity and Sniper Effects Die,” a complicated new dice accessory from Battleschool that tries to use one die to help players remember several different effects.  The result is a bit like a one-man-band.  Yes, it is possible for one person to play a number of instruments, but do you really want that?

The “Wound Severity and Sniper Effects Die” is a 5/8″ (16mm) custom precision white die with rounded corners.  It tries to serve several functions at once:

The problem is that if you can remember all of these different pips and crosses, etc., then you can probably remember what happens even when you use a normal die rather than a custom die.  It just gets a little unwieldy. 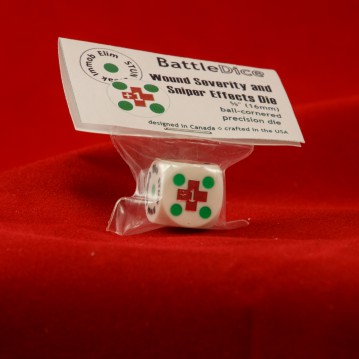