If an ASLer ever wanted to spend a lot of money for no particularly good reason, this would be the perfect opportunity.  Years of Glory & Grief I (YGG-I) was the first of three small amateurish modules created by computer wargamer “Wild Bill” Wilder designed to take ASL to the Vietnam era (an era the system was not designed to go).  Each module features homemade counters that were printed on a printer, hand-mounted to cardboard, front laminated, and separated with a rotary cutter.

Wilder and his friend Tom Tietz at First to Fight Variants only offer copies of this (and other) modules for sale through E-bay, one copy at a time.  As a result, the ASL “completist” crowd will always drive up the price, and this small module can easily sell for $200 a shot.  Is it worth $200?  Absolutely not.

What is it worth?  That may depend to some degree on personal taste, but the bottom line is that it is not worth very much.  Most serious ASLers would probably never play it.

What is the basis for this judgment?  First, let’s start with the rules.  Even Wilder himself admits, in his marketing material for the module, that “the suggestions for play and the descriptions of the units and their special characteristics are not iron clad.  I am not a rules ‘guru.’  I offer these as guidelines for their use in the game…differences of opinion between players can be resolved with a ‘friendly roll of the die.'”

The translation for this is that the rules for this module have not been rigorously developed or playtested and may well be rife with errors, inconsistencies, and problems.  In other words, the rules are likely to be exactly what sets the typical anal-retentive (you know you are) ASLer’s teeth on edge.

Take a gander at the U.S. countersheet image below, for example.  Ignore for a minute the numerical values (oh, we’ll get back to those!); just look at the layout.  Notice anything missing?  Anything like a smoke exponent, or assault fire, or spraying fire, or underlined morale?  Perhaps all that is explained in the rules, but even if so, why leave it off the counters?

Okay, now take a look at the rest of the counters.  Perhaps a U.S. squad armed with M-16’s might deserve an 8-5-7 squad rating, although that seems a little precious for non-elite troops.  But what are these 7-5-9 “Elite Teams” that appear to be half-squads?  From what magical army did these Rambos come from?  Moreover, their leaders all seem to have a 10 morale.  This is simply pure fantasy.

For what it is worth, this module in the series introduces U.S. Army and NVA forces and focuses on base camp operations (the included overlay is of a base camp).  Two of the four scenarios (2 set in 1965, 1 in 1966, and 1 in 1971) feature base camps.

So, bottom line:  this module features only 4 scenarios (of uncertain playtesting), rules of uncertain development, non-diecut counters, and is unlikely to be available for less than $100.  If this sounds like your cup of tea, head over to E-bay. 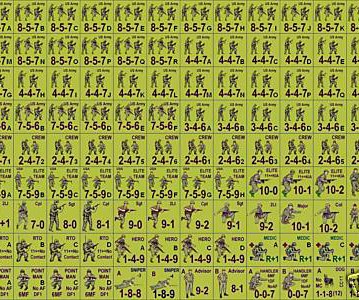