Zerf Stranglehold, aka the Great Gray Monsterpiece, is a 2019 historical module published by Critical Hit that details the actions of the U.S. 5th Ranger Battalion in February 1945 after crossing the Saar River to scale the hill known as the Hocker Berg and set up a roadblock on the road between the villages of Irsch and Zerf, which would interfere with German logistics. However, the Rangers were not relieved after two days, as planned, and had to hold out against German counterattacks for more than a week.

Theoretically, this is an interesting action around which to base an ASL product.  It features elite U.S. “special forces” in the form of Rangers, who don’t get a ton of attention in ASL, while it also takes place far away from any beachheads, which is where most Ranger actions portrayed in ASL took place.  It’s also a late war, winter action, both of which have their own appeal.  The German mountain troops opposing the Rangers were no slouches, either.

However, in practice, this is a typical Critical Hit module cobbled together hastily with no tender loving care–nor any hint of developers or playtesters being credited.

The problems start with the Zerf map. It’s a large map–very large indeed–depicting a large,partially woods-covered hill mass.  The map must be formed by assembling 12 glossy 12″ x 18″ heavy paper/light cardstock map panels into a large square. You’ll have to stretch to reach the middle. The hexgrid goes all the way to YYY51, which means that the map has some 3,927 (standard-sized) hexes. That’s about the equivalent number of hexes in 12 8″ x 22″ geoboards.

The main problem with the map is that it is “winterized,” meaning that Critical Hit used shades of white and gray (rather than green and brown) to represent different elevation levels.  However, it is not winterized very well.  Moreover, there are some 14 or so elevation levels that have to be represented in gray scale, which makes distinguishing one terrain level from another rather difficult, especially if the lighting is not extremely bright. If that weren’t bad enough, numerous boards have large patches of what are apparently supposed to be Plowed Fields (the rules example of a Plowed Field hex is incorrect, which doesn’t help anything).  This terrain is extraordinarily faint, especially on the darker shades of gray and it is quite likely that players will fail to see this terrain more often than they notice it (it is so bad that some players may want to use a colored pencil to actually outline the Plowed Fields in order to see them).  There are other problems on the map, too, including poorly rendered buildings and disappearing crestlines. There are also some odd partial orchard hexes (and a strange orchard rule, too). It’s just rather sloppy.

There are barely any rules at all.  Although the product comes with 4 pages of rules, two pages are just historical material and a third page contains arbitrary rules that Critical Hit just throws willy-nilly into many of its products, such as “optional cargo trailer” rules, rules for walkie-talkies, and the Bayonet and March Fire rules Critical Hit “borrowed” from Kinetic Energy, none of which are relevant here.  Essentially, Zerf has a mere handful of rules, primarily to delineate terrain. There’s very little here that is actually derived from the historical situation at Zerf.

Zerf comes with 8 scenarios. Four are medium-sized, two are large, and two are monster-sized.  One scenario is a Night scenario.  Seven of the 8 scenarios feature OBA (often with both sides having it).  No scenarios have Air Support.  The Americans are all infantry; the German forces tend to be more varied. Many of the scenarios have a large number of turns; this may in part be because of the snow-covered ground.

There are two monster-sized historical scenarios, one using the whole map and the other using almost all of it.  ZS7 (North Side, South Side) is a 20 turn scenario featuring a German attack on the Ranger position with 61 squads and a handful of light AFVs.  The Rangers have 36 squads, 6 guns, and accoutrements.  ZS8 (Crossfire Hurricane) is a 25-turn scenario with Americans on the attack. They get 47 squads, 4 tanks and 4 guns, while the Germans have 51 squads, 4 light AFVs, and 2 guns.

The scenarios seem hastily composed.  So little was put into the scenario cards that the historical description for “Crossfire Hurricane” was plagiarized directly from an account by a veteran, without even bothering to change the language from first person to third person. Again, there are no playtesters credited and it is likely there was no playtesting done here.

At the same time that Zerf was released, Critical Hit released, for separate purchase, a whole host of alternate map sets, including a “Monster Map Set” with large hexes and an “Uber Monster Map Set” with extra-large hexes, as well as both “Monster” and “Uber Monster” map sets featuring the map done in regular ASL “summer” colors rather than the grayscale of the original Zerf map.

Even for fans of Ranger/Special Forces action, this just does not seem like a product with value. 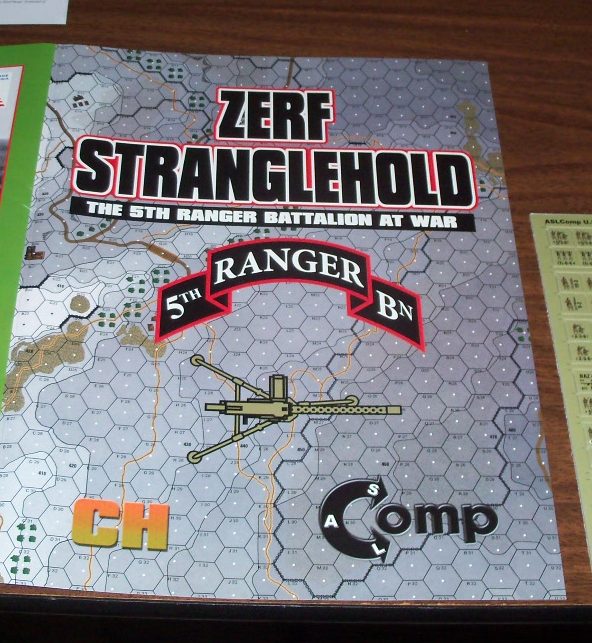