Critical Hit Magazine Volume 3 Issue 1.  48 pages (plus 12 scenarios included separately on cardstock; also included are seven unmounted counters [fronts only]:  6 French FCM 36s and 1 German Fl Wg B-2(f)).  The article content of Critical Hit’s fifth offering is less satisfying than in earlier issues, although there are designers notes by Charles Markuss and Shaun Carter, and separate notes by Steve Parillo, as well as an article on scenario design by Steven Swann.  Probably the single most interesting article in the magazine, and one of the more interesting articles of the magazine’s entire run, was “Over My Shoulder:  Beginner-Expert Analysis” by David McGuire and Steve Pleva.  This article features an analysis of a scenario by a relative beginner and a critique of it by an expert ASL player.  The article provides great insight into the different things that experts and novices see when approaching the same scenario.  Unfortunately, this experiment was never repeated, nor did any other ASL publication take the idea and run with it.  This is too bad, as it is interesting for novices and veterans alike.

This issue has no superstar scenarios in it, but worthwhile actions include CH51 (The Sonnenburg Hotel) and CH58 (Death Ride).

In 2014, Critical Hit issued a facsimile reprint edition of this issue of the magazine, which has the look and feel of a xeroxed copy of the original.  There appear to be no changes in the magazine or the scenarios (which means errata may not even have been added).  They priced this facsimile edition at $19.95. 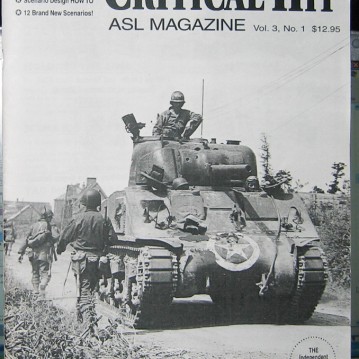