2nd Edition: Same as above, except for 1 set of 127 counters and no overlay.

In 2011, having developed a new style of 5/8″ counter artwork, Critical Hit set about hurriedly reprinting many of its products with new die-cut counters included, apparently hoping that people would re-buy many of these products. A Few Rare Men is part of this rush, although different from the others in that it was not previously a discrete product. Rather, it is a sort of Frankensteinian small scenario pack, formed from a jumble of parts.

None of the six scenarios are original; they are all reprints or variations of some little-played 1940 scenarios that originally appeared in Critical Hit Magazine Volume 6, Number 2. Some have been changed to allow for new CH geomorphic maps (see below).

The small countersheet that appears in this pack (in duplicate) is gratuitous and random, featuring mainly a selection of British MMCs and SMCs. It is totally unnecessary.

The one item in the pack that is both new and noteworthy is a new geomorphic mapboard, dubbed CH2 (CH1 appeared in the 2nd edition of Gembloux: The Feint, released at the same time. Of the scenarios in A Few Rare Men, CH130 (No Quarter at Queniau) and CH133 (Group Iron) use CH2, while CH128 (A Few Rare Men) and CH129 (St. Homme Skirmish), use CH1. Naturally, the product packaging does not mention that Gembloux II is required to play 33% of the scenarios in the pack. It is not clear that any of the scenarios were re-playtested with the new maps.

The map CH2 is a somewhat odd hills/farmland combination. The grain artwork is bizarrely “gloopy,” making the fields look more like jigsaw puzzle pieces than actual farm fields. The woods terrain is virtually all “stamped” computer graphics–the re-using of a single woods graphic over and over again, which makes the woods look weirdly identical. Overall, it is not an inspired piece of artwork. Moreover, given the past history and current trends of Critical Hit, one has to wonder how much use can be gotten out of this mapboard just to begin with. Critical Hit has had a poor history of supporting its previously released geomorphic mapboards (i.e., by subsequently designing more scenarios that utilize them), while currently, Critical Hit prints very few geomorphic map scenarios, instead heavily concentrating on historical map scenarios. As a result, this board might well end up gathering dust on the shelf. As a result, its presence is not as exciting as it might otherwise have been.

Unfortunately, the geomorphic board is one of a bundle of geoboards designed and produced by Critical Hit in late 2011 and all of them suffer from problems. Some of them are not cut correctly (see image below). However, with all of them, their hexgrid was made slightly tinier than it should have been, with the result that the hexgrid cannot line up correctly against the hexgrids of official maps. This is a significant problem that should have been caught and corrected and largely negates whatever value the map might have brought to the product.

This product is probably more of a product for completists than for anybody else. It’s a hastily thrown together patchwork product.

2nd Edition Comments: In the summer of 2013, Critical Hit quietly released a second edition of this product. It contains the same six scenarios and the same geomorphic map. It seems as if the hexgrid problem of the original edition has been fixed. The village overlay has disappeared, which is a problem, since one scenario still requires it. A second partial countersheet (primarily German MMC, SMC, and SW, plus some French AFVs) has been added, although unlike the 1st printing, there is only one set of these counters. 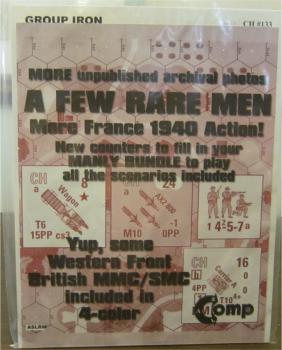